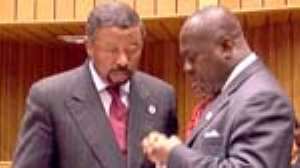 FRESH INVESTIGATIONS are to be conducted into the circumstances surrounding the deaths of some Ghanaians in The Gambia.

Under the new arrangement, Ghana and Gambia have agreed to establish a joint UN/ECOWAS facilitation mechanism, involving the International Committee of the Red Cross and Interpol, to assist the two governments with the investigation and to ensure that the investigation is conducted in a timely and transparent manner.

These were contained in a statement issued by the Minister of Foreign Affairs, Regional Integration and NEPAD, Hon. Akwasi Osei-Adjei in Accra on Thursday.

The statement noted that as part of ongoing efforts to resolve the issue involving the deaths of some Ghanaian nationals in The Gambia, Hon. Osei-Adjei, on 16th January 2008, met with the Gambian Minister of State, Hon. Crispin Gray-Johnson and the President of ECOWAS Commission, Dr. Mohammed Ibn Chambas, in the margins of the ECOWAS Security and Mediation Council meeting in Ouagadougou, Burkina Faso.

At that meeting, the parties agreed to resume investigations into the circumstances surrounding the deaths of some Ghanaians in The Gambia, which had stalled as a result of the lack of cooperation on the part of The Gambian Government.

The statement added that the Ghanaian side further requested the intervention of the UN in the matter to bring pressure to bear on The Gambian side to cooperate fully in the investigation.

In the aftermath of that meeting, the statement said, the UN/ECOWAS organized a meeting in Abuja from 12th to 13th May, 2008 to discuss the various modalities for taking the process forward in accordance with the Ouagadougou agreement.

That meeting was attended by representatives of the UN, ECOWAS and the Ghana Government. As with previous meetings, The Gambian side once again failed to attend.

The meeting regretted the failure of The Gambians to attend and noted the efforts and the concerns of the Government of Ghana to have the issue thoroughly investigated and resolved in a manner satisfactory to both sides.

The meeting emphasized the need to get The Gambians to cooperate fully with the investigation. It was decided that representatives of the UN should visit Ghana and The Gambia to discuss with their leaders the way forward in finally resolving the impasse.

In pursuance of that decision, a five-member UN team, led by the Assistant Secretary-General for Political Affairs, Mr. Haile Menkerios, on Thursday, 15th May, 2008 held discussions with Hon. Osei-Adjei in his office on the matter.

The Minister reiterated Ghana's position that it wanted the UN/ECOWAS sponsored investigation to assist in unraveling the truth surrounding the deaths of the Ghanaian nationals on Gambian soil; to have the bodies of the dead returned to Ghana for befitting burials, as well as facilitating the payment of adequate compensation for the victims.

The Minister, however, acknowledged the long-standing good relations existing between Ghana and The Gambia, noting that several thousands of Ghanaian nationals lived and worked in The Gambia while there were some Gambians also living and working in Ghana.

He stressed that it was necessary for the UN/ECOWAS to impress upon The Gambian authorities the need to expeditiously bring this matter to a satisfactory closure and not to do anything to jeopardize this long-standing good relation.

Hon. Osei-Adjei thus urged the UN delegation to help secure the full cooperation of The Gambian authorities for the investigation to commence without further delay.

The statement added that the delegation, which has since left for The Gambia to meet with that country's leadership, promised to bring to the attention of The Gambian Authorities, Ghana's concerns for the Gambians to act with the seriousness which the matter deserved.

Speeding motorbike runs over pedestrian at Nungua
21 minutes ago

A/R: One robber shot dead, two others arrested
29 minutes ago