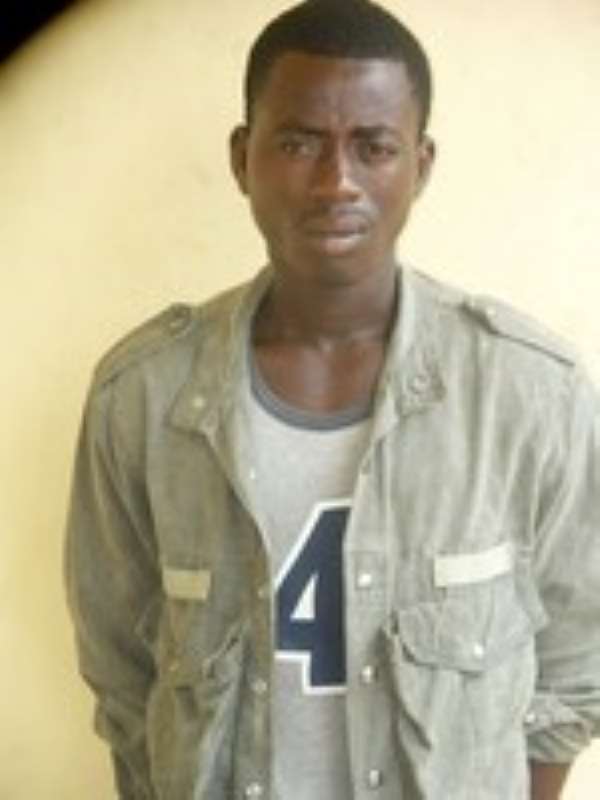 Emmanuel Ayeh Asare, the prime suspect in the robbery and murder of the 72-year-old pensioner, at Dansoman Estate, Accra, was yesterday arrested by the Dansoman Police at his hideout at Kasoa, in the Central Region.

The breakthrough followed a 12-week intensive manhunt for the 24-year-old, popularly known as ‘KB’ a step grandson of the deceased, Emmanuel Ayeh, who was buried on May 3.

In his statement to the police shortly after his arrest, KB admitted having hatched the idea of robbing Mr Ayeh with his friend, Adjei Kpakpo, a narcotics dealer whom he had known for only a week before the incident, that resulted in the death of Mr Ayeh.

After interrogating KB, a team of police personnel from the Dansoman Police and the Greater Accra Regional Police Command raided a safe haven for drug addicts at Odorkor where Kpakpo was said to be residing but was told he vacated the place two months ago.

However, the police succeeded in arresting a 44-year-old man, Abeiku Thompson, a drinking bar operator who allegedly bought the robbery items.

Narrating events that led to the death of his step grandfather, KB told the police that he had been smoking wee for the past four years, and that their motive for the February 29 attack was to rob the old man of monies.

He said he told Kpakpo about some money he saw in Mr Ayeh’s house which he wanted them to steal. He said that a week later he got to know that his grandmother had travelled, so he went to the house with Kpakpo to steal the money. When they got to the house, the door was locked and there was nobody inside. We waited outside for sometime before I saw Mr Ayeh coming. He opened the main gate and went to his room and I followed him inside, KB told the police.

KB said that he had a chat with Mr Ayeh at his living room while Kpakpo waited outside.

He later sneaked into Mr Ayeh’s bedroom. I was in the bedroom stealing when I heard some noise in the living room so I rushed there and saw Kpakpo struggling with Mr Ayeh.

According to him, he helped Kpakpo to tie Mr.Ayeh’s neck and hands with telephone wires, after which he also tied the old man’s legs, and we carried him to the bedroom.

Afterwards, he said that he escorted Kpakpo to the main gate with the stolen items which included GH¢230 and he returned to the bedroom only to find blood oozing out of Mr Ayeh’s mouth. I loosened the wire on his neck and wiped the blood before fleeing, he recalled.

He said that when he came out of the main gate, he met two of his friends whom he had a brief conversation with before leaving for Odorkor to join Kpakpo.

After spending three days at Kpakpo’s place, he said, he went into hiding at Agona Swedru where he spent a month before leaving for Kasoa in the first week of April.

Looking rather remorseful he told the interrogators that he never heard about the death of Mr Ayeh until yesterday when he was arrested by the police, adding I feel really regretful.

Mrs Joyce Umanta, daughter of the deceased told the Times yesterday that although the family members had not been informed about K.B’s arrest, she was thankful to God that he has been arrested.