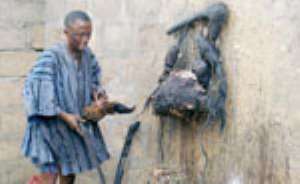 THE FOUNDER and Leader of the Ebenezer Worship Centre at Ahenema Kokoben, a suburb of Kumasi, Reverend Ebenezer Adarkwa Yiadom has failed to meet Kwaku Bonsam, a famous fetish priest, for a proposed miracle showdown.

Rev Yiadom recently dared Kwaku Bonsam to meet him face-to-face for a competition of miracles to establish who was more powerful.

Rev. Yiadom had earlier indicated that he was ready to meet Kwaku Bonsam in a miracle showdown which would include healing, casting out of demons, raising the dead, among others.

He had consistently rubbished claims by Kwaku Bonsam that he possessed supernatural powers and that some pastors even came to him for powers to establish their churches.

Exasperated by the pronouncements from the Man of God, the fetish priest hurriedly accepted the challenge and even proposed that the show should take place at the premises of Rev. Yiadom's church.

Nana Kwaku Bonsam, in a haste to demonstrate his supernatural prowess, tasked any interested event organizer to set the stage for the miracle showdown.

The fetish priest, whose popularity keeps soaring by the day, even offered to foot the bill of the organization of the who-is-who miracle contest.

In view of this, Fun Time Promotions, Kumasi-based event organizers, offered to set the stage for the super miracle battle.

He mentioned the venues as the Cultural Centre, the Baba Yara Sports Stadium and the Jackson Park, all in Kumasi.

The CEO indicated that the show was expected to come off on Thursday, May 15 if the venue of the contest is agreed on by both participants.

Mr. Kyeremateng disclosed that official letters indicating details of the miracle encounter had been sent to both Kwaku Bonsam and Rev. Yiadom.

According to the CEO, whereas Kwaku Bonsam had replied the letter indicating his willingness to partake in the exercise at any venue chosen for the show, Rev Yiadom was yet to respond.

Mr. Kyeremateng stated that attempts to get an official response from Rev Yiadom have since failed.

“Rev Adarkwa Yiadom has failed to grant us audience to discuss the event and when he is called on the phone he does not pick the call,” he explained.

He said they would do their best possible to get a response from Rev Yiadom, to be sure whether to make final arrangements for what is expected to be a great miracle show.

The CEO mentioned that last Monday one Pastor Bob, who runs a church at Tafo Pankrono, a suburb of Kumasi, approached his outfit and expressed his desire to participate in the who-is-who spiritual contest.

According to the CEO, Pastor Bob said if other pastors were afraid to compete spiritually with Kwaku Bonsam he was not, and that he had been sent by God to destroy people who proclaim to have more powers than God.

Pastor Bob, he said, had accepted to join the show at any of the proposed venues apart from the Cultural Centre.

Mr. Kyeremateng indicated that his outfit may consider charging a fee for the show, depending on the agreed venue.