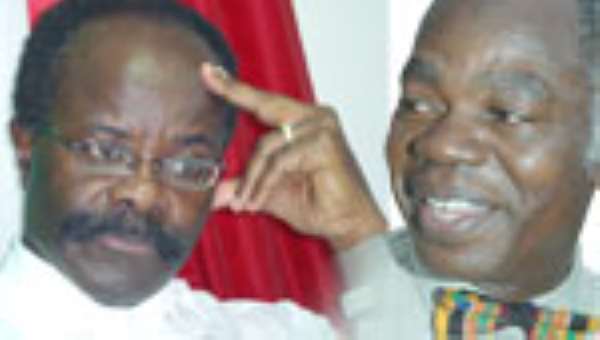 The proposed electoral alliance between Nkrumaist parties, Convention People's Party (CPP) and People's National Convention (PNC), is falling apart even before it is consummated.

DAILY GUIDE learnt that the PNC leadership was fuming with rage over the manner in which the pact was leaked to the media, accusing the CPP of acting in bad faith.

Leaders of the two parties met at the Golden Tulip Hotel on Tuesday night, engaging in what was described in political circles as 'midnight marriage' between the two parties with the purpose of fielding common candidates, including a presidential candidate for the two parties in the December 7, 2008 polls.

The midnight meeting settled on the CPP's Dr. Paa Kwesi Nduom as the joint presidential candidate for the two parties after the Electoral College had given him 11 votes as against nine for the PNC leader, Dr. Edward Mahama, who automatically picks up the running mate slot.

Since the news of the pact broke, it had been CPP gurus who virtually hijacked the airwaves trumpeting it, with PNC leaders maintaining studied silence.

Sources said the midnight meeting resolved that only the two national chairmen, Ladi Nylander of CPP and Ahmed Ramadan of PNC could make public pronouncements, but this had not been adhered to, raising suspicion about CPP's motive.

At the meeting, the two parties presented 10 members each to form the 20-member electoral college which included the two flagbearers. After balloting, Dr. Nduom was chosen.

DAILY GUIDE learnt that the CPP delegates included David Ampofo and Wing Commander Sorgbordjor, whose presence had been questioned since they did not hold any executive positions in the CPP.

Mr. Ampofo, a campaign strategist of the CPP flagbearer, was alleged not to be a registered member of the party, and therefore should not have voted.

PNC members were already angry with the outcome of the meeting especially the leakage to the media when the National Executive Committee of the two parties had not finalized the deal.

They questioned the legality of the pact and threatened a showdown with leadership.

John Ndebugre, PNC MP for Zebilla said the alliance was illegal.
According to Emmanuel Wilson, Deputy National Youth Organiser of the PNC who voted at the midnight 'marriage', his party would likely reject the pact.

“It is like NEC will reject it. We did not go through the right channel,” he told DAILY GUIDE yesterday.

Dr. Edward Mahama, who was not ready to talk about the electoral pact, said he would issue a statement soon.

“We the youth of the PNC are not part of the deal,” she said.

According to Zalia, a former parliamentary candidate at the Ayawaso Central constituency, the haste with which the alliance was announced by the CPP elements suggested that the Nduom-led pact had a hidden agenda.

Tuesday's Golden Tulip Hotel 'marriage' was the outcome of a one-week paper communication between the two parties, in which they spelt out the terms of the electoral pact.

According to the two parties, they would field common parliamentary candidates and a presidential candidate.

However in the case of the presidential candidate, the PNC proposed that the party presenting the candidate should adopt the other party, meaning that Nduom should stand on PNC's ticket, a proposal rejected by the CPP.

According to the CPP, which has no congressional mandate to negotiate for an electoral alliance with other Nkrumaist parties, unlike the PNC, an electoral college should be composed to elect a candidate and that the PNC proposal would not fly with CPP members.

Meanwhile, Dan Lartey, leader of another Nkrumaist party, Great Consolidated Popular Party (GCPP), has indicated that the alliance was an exercise in futility.

He ruled out the possibility that GCPP would join the alliance, stressing that it (alliance) was one of convenience and did not have the strength to change the political equation in the country.

Mr Lartey told Joy Fm that he did not expect the alliance to pull any surprises in the coming elections.

He was of the opinion that Dr Nduom would not bring anything new on board, having served in the Kufuor administration as minister at various times.

In the case of Dr. Edward Mahama, he said the PNC leader had sold his health insurance idea to the NPP.

According to the GCPP leader, the health insurance system, brainchild of the PNC, had failed.

He argued that the two party leaders had contributed to the Kufuor administration but “couldn't get anywhere; so how can the two together achieve something?”