We will remain focused – Mills 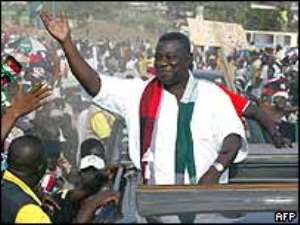 Sefwi Asawiasno (E/R), May 14, GNA – Professor John Evans Atta Mills, flag bearer of the National Democratic Congress (NDC), on Wednesday said that the NDC would remain focused and would not be distracted from its goals to make Ghana better.
“Our opponents can give us names, impute ill-motives to our course through vile propaganda but we would remain steadfast and emerge victorious in the election 2008,” he said.
This was the core message that Prof. Mills continued to give when he met chiefs, community leaders, traders, farmers and drivers at separate meetings during his tour of the Western Region which began on Monday.
The tour which has taken him through Kumasi to Bibiani, Sefwi Anubianso, Sefwi Awaso, Sefwi Bekwai, Sefwi Wiawso, Sefwi Boako, Bobi and Enchi where he continued to receive rousing welcome.
Prof. Atta Mills, launching NDC campaign in Accra recently promised Ghanaians that he would govern with the truth, honesty and transparency.
He said the NDC would improve on the cocoa rehabilitation project it started during their administration and would pay cocoa farmers what exactly was due them and would not politicize the cocoa industry.
Prof. Mills said he was still committed to rekindle hope in Ghanaians, revitalize the economy and invest in jobs and make sure that life would be more bearable under the NDC government than they were currently experiencing under the NPP administration.
He urged all those who would be 18 years and above to register when the voters' register was opened. He also urged the party's supporters to be united, maintain the peace and be vigilant on Elections Day to ensure they were not robbed of victory.
He said the party had already declared that it was not going to engage in a comparison of records to distract attention from challenges that faced the country such as the energy crisis, unemployment, education, health, the drug menace, expansion of the economy but work to create a better Ghana for the people.

Covid: It will be excellent to vaccinate 80% of the populati...
6 minutes ago