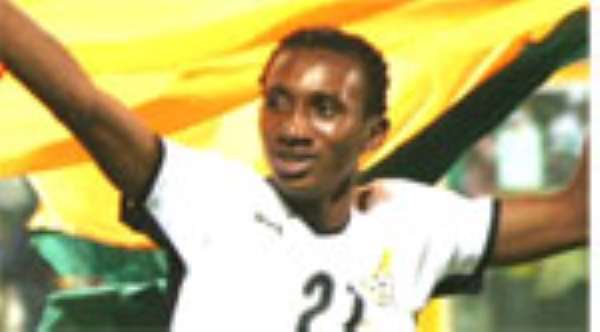 On Monday, Kumasi witnessed scenes of wild jubilation when Asante Kotoko humbled Dolphin FC 4-1 to advance to the next stage of the Africa Confederations Cup competition.

Kotoko, who entered the game with a two-goal deficit from the first leg, conceded an early goal before conjuring magic to trounce their guests, who gave them a nightmarish experience on the day.

The wild cheers that greeted Angolan Referee, Jose Antonio's whistle to bring hostilities to an end, shook the very foundation of the Baba Yara Stadium in Kumasi.

The supporters who sat on tenterhooks for the better part of the game, could this time sigh in relief; as they were seen shaking hands with or hugging each other.

The Kotoko players, who could not believe their tenacity had paid off, did the lap of honour amidst chants of 'fabulous the best' by the over joyous thousands of fans that jammed the huge stadium to the brim.

Ghana international, Harrison Afful, who could hardly contain his joy, openly danced the 'kpanlogo' to the delight of the fabulous faithful who stayed glued to their seats at the stadium for almost one hour after the game.

An excited soccer fan, Kenedy Okyere from Asokwa told DAILY GUIDE SPORTS that he wished the day would last forever. “This is the happiest day of my entire life,” he said, adding, “Kotoko be kume”, to wit 'Kotoko will kill me'.

He recounted that the victory reminded him of a similar triumph chalked by Kotoko over Almighty Zamalek of Egypt in 1987, in which game Kotoko with a 0-2 deficit from the first leg came from a goal down to beat the Egyptians 5-1 at the same venue.

The entire Kotoko management led by the CEO, Mr. Sylvester Asare Owusu who could not hide their joy, also joined the excited players on the field to openly express their happiness.

Mr. Sylvester Asare Owusu, beaming with smiles, thanked the Kotoko supporters and promised that the Porcupine Warriors would do all they can to keep them happy.

Coach Bashiru Hayford who enjoyed a kingly ride on the shoulders of his players dedicated the victory to what he described as 'true Kotoko fans' that supported the team in trying moments of the game.

Meanwhile, there were ecstatic scenes in some suburbs of Kumasi after the game, especially around the stadium area- Asafo, Bantama, Krofrom and Ash Town, where drinking bar operators recorded colossal sums from the sale of alcoholic beverages.

Elated soccer fans, clad in red colours of Kotoko were seen openly dancing in the streets to some selected hip life tunes which were being played in loud speakers at drinking spots.

As some of the supporters were having a time of their lives in the drinking spots, other fans were seen on top of cars, amidst tooting of horns and chants of 'Fabulous the best' to display their joy.
Some fans even went to the extent of stripping naked in wild jubilation.

The joyousness, which was so massive across the entire Garden City, traveled deep into the night and some intoxicated supporters were seen lying by the side of the roads.