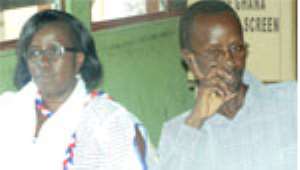 This defeat by his bitter rival, Madam Beatrice Boateng, dealt a devastating blow to his political career.

Madam Beatrice Boateng, popularly known as B.B. is the Greater Accra Regional Manager of Presbyterian schools and a former Presiding Member of the New Juaben Municipal Assembly. She had 54 votes as against the incumbent MP's 47.

The third contender in the race, Augustus Amponsem Boateng was completely written off and had no vote in the contest.

B.B. gave Hon Barimah a good run for his money in 2004 when the two engaged in a similar electoral duel for that year's election.

With his defeat, Hon. Barimah, a Minister of State at the Presidency has become the third sitting MP to lose a primary in the Eastern region since the primaries started last Thursday.

The first to lose his candidacy was J.B. Danquah-Adu, MP for Abuakwa North, followed by James Appeatu-Ankrah, MP for Lower West Akim, who also lost miserably in the party s primary on Sunday to a young business woman, Ms Gifty Klenam.

Hon. Apeatu-Ankrah could only manage 23 votes as against Ms Klenam's 63.

The same fate could have befallen the sitting Member of Parliament for Akwatia, Kingston Kissi, who read deep into a crystal ball and withdrew from the race honourably because he realised the grounds were not fertile for him.

In Hon. Kissi s place, a medical doctor, Dr. Kofi Asare, massively won the primary against Philip Owusu-Ankomah, who previously contested the primary with the incumbent and was seen as the favourite to win the primary this time round.

He said the devil in the NPP was better than an angel in the opposition National Democratic Congress (NDC), stressing that he was prepared to fully support Madam Boateng to retain the seat for the NPP.

He appealed to supporters of Madam Boateng to refrain from provocative and inflammatory statements since they needed to be united to win the big fight ahead.

The new parliamentary candidate, on her part, promised to work with every party member in the constituency to help retain the seat for the party.

She dedicated her victory to the Almighty God as well as her numerous supporters in the municipality.

Her victory was followed by a huge procession by her supporters through the principal streets of Koforidua.

In a related development on Sunday, the Deputy Minister for the Eastern Region and MP for Kade, Ofosu Asamoah, became the only sitting MP in the region to retain his seat with a clear victory.

He beat three other contestants with a huge difference.

Hon. Asamoah, who had been MP for Kade for the last eight years, won with 72 votes while his closest contender, C.O. Mintah had 24 votes.

The Presiding Member for the Kwaebibirem District Assembly, George Aboagye, had 10 votes while the last contestant, Dr. Kwame Ankomah Kwakye, had just a single vote.

One interesting development that DAILY GUIDE has realised in the course of the primaries in the Eastern Region is that almost all the parliamentary aspirants who had aligned themselves with the constituency executives were losing out.

In another development, the MP for Ahafo Ano North in the Ashanti Region, Kwame Owusu Frimpong also lost his bid to represent the ruling party in the December 7, 2008 polls.

He was defeated by Richard Akuoko Adiyaa, a United States-based United Nations staff, in the five-man race at the constituency primary yesterday.

Adiyaa had 81 votes as against 15 votes garnered by the incumbent, with Kingsley Nsiah Poku of the Food and Drugs Board (FDB) polling six votes and Nana Akua Asantewaa, Nkosuohemaa of Tepa and Awuah Buadu Ayebuafoh receiving three and two votes respectively.

Budget approval: NDC and Adwoa Safo’s PA engage in ‘It’s her...
19 minutes ago