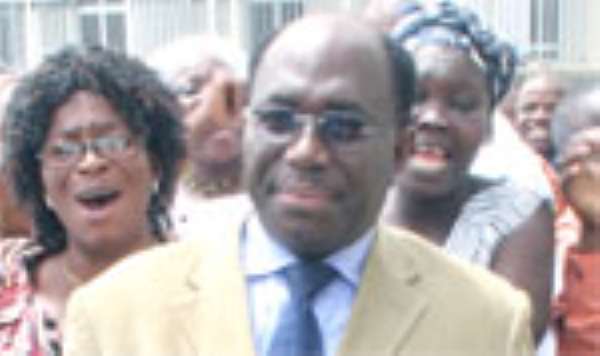 THE Minister of Transportation, Dr Richard Anane has got the nod to contest the Nhyieaso constituency seat on the ticket of the ruling New Patriotic Party (NPP) in the December 7 parliamentary polls.

At a constituency congress organized on Sunday, May 11 at Beauty Queen Hotel in Santasi, a suburb of Kumasi, all the73 delegates in the Nhyieaso constituency popularly acclaimed Dr Richard Anane to contest the seat the second time.

While two of the contestants voluntarily withdrew their nominations, Mr. Owusu, who was expected to give Dr Anane a good run for his money, was disqualified by the party's vetting committee.

Mr. Owusu's disqualification was necessitated by his refusal to appear before the vetting committee on grounds that the committee was partial.

It would be recalled that Mr. Owusu hit the headlines recently when the picking of nomination forms from the constituency office in Kumasi generated controversy which ended in fisticuffs.

Present at the acclamation ceremony were regional officers of the party, constituency executives, party faithful and supporters of Dr Anane.

When the electoral commissioner announced that Dr Anane was the only candidate in the race and that popular acclamation was needed to confirm him, the delegates responded with deafening applause and subsequently approved him.

Speaking at the colourful but brief ceremony, the constituency chairman, Mr. George Kofi Adjei, popularly known as “Georkard”, denied allegations that the executives were biased against the other contenders especially Mr. Kwame Owusu.

“As far as I am concerned, there was a level playing field for all who expressed interest to contest the party's primary.”

He said neither the constituency executives nor Dr Anane played a role in the disqualification of Mr. Owusu, explaining that Mr. Owusu disqualified himself by refusing to appear before the vetting committee.

Georkard admonished party faithful to forget entirely about what had happened prior to the primary and rather unite for victory in the general elections.

“From now onwards, we should all concentrate on how to maximize votes for Dr Anane and Nana Akufo-Addo in the December elections,” he told the delegates, stressing that their concern now should be a landslide victory for the party.

Dr Anane, on his part, thanked the delegates for the confidence reposed in him, and assured them that he would be a worthy servant for the benefit of the constituency.

He promised to continue to help give a facelift to the constituency for it to take its rightful place among the comity of constituencies.

Dr Anane stressed the need for members of the party to stay focused and united, advising them to shun rancor and bickering so as to ensure resounding victory in the December general elections, which he described as crucial.

The Transportation Minister charged party faithful to be abreast of the mammoth achievements of the NPP government and spread the good news to non-members of the party.

He promised to work in close collaboration with the supporters in all levels this electioneering year in order to ensure that Nana Addo Dankwa emerge as President Kufuor's successor on January 9 next year.