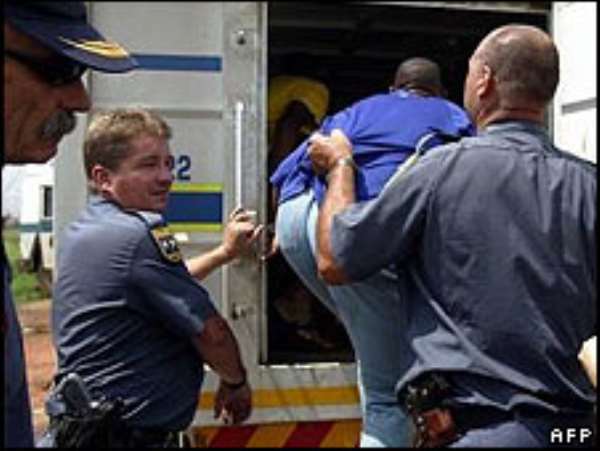 
Police reinforcements have been sent to the South African township of Alexandra, north of Johannesburg, after attacks on foreigners.

Two people were killed and about 40 injured during the attack on Sunday.

A crowd of local people attacked migrants from Mozambique, Malawi and Zimbabwe, telling them to leave. Police have arrested 15 people.

People from across the continent have been attracted to South Africa by its relative peace and prosperity.

This has led to an increased number of attacks on migrants by those who say the foreigners are taking local jobs and contributing to crime.

The economic and political crisis in Zimbabwe has lead to an influx of migrants into South Africa.

Earlier this year, two foreigners were killed and 1,000 left homeless when their houses were burnt down outside the capital, Pretoria.

Around 600,000 people live in Alexandra township, which attracts migrants from across southern Africa.

The BBC's Mpho Lakaje in Alexandra says mobs chanted "Drive all foreigners away."

Many Zimbabweans and Mozambicans occupy shacks and free government houses as they desperately try to make ends meet.

"They took all my money, my stove and other personal possessions," said a woman from Mozambique.

"They went on to rape my sister. I'm going to hide at the police station as I fear for my life."

"They beat us. Two of my brothers are dead," said a Zimbabwean woman.
"We don't know why they are chasing us away. They didn't give us any warning."

Neria Malefetse from Johannesburg police said her officers are working to prevent the situation from spiralling out of control.

"I believe that xenophobia exists in South Africa," she says.
"But we need to find other means of dealing with problems than resorting to violence."

President Thabo Mbeki has condemned the acts of violence.