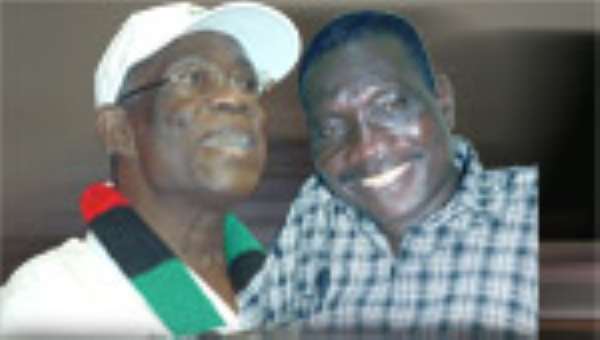 Prince Adam Hamidu, former coordinator of the defunct Civil Defence Committee (CDO) and a known National Democratic Congress (NDC) cadre, has alleged that the party's presidential candidate, Professor John Evans Atta Mills is not fit enough to embark on an effective presidential campaign for the remaining months to the election.

He suggested that in order to remedy the worrying situation, the professor should swap positions with his running mate, John Dramani Mahama, so the latter could complete the task ahead, which he considered more daunting than what had so far been done.

Stirring the hornet's nest through a press release in Accra, followed by an interview, the vociferous NDC foot soldier who was 'rewarded' with slaps for daring to speak against the flagbearer, called for an open discussion of the former vice president's health status and cautioned that nothing on the issue should be swept under the carpet.

Describing himself as an apostle of the party, Prince Adams threw a challenge to party faithful across the entire country to form pressure groups to demand the setting up of a medical board to examine the presidential candidate, contending that the professor's health status was a source of worry to the rank and file of the party.

He stressed that Professor Mills was currently not in the best of health conditions and lamented that some party bigwigs were desperately trying to sweep the matter under the carpet.

“The coming election is very crucial and we need to go into it very fit at all levels, including that of the flagbearer. Whether we like it or not, his health must be a source of worry to us,” he noted.

According to the release, the NDC could suffer what he called a 'political tsunami' if it failed to present a physically fit candidate.

Prince Adam therefore appealed to a group he referred to as 'the Fante Confederacy' to speak to the professor to step aside in the larger interest of the party.

Asked what basis he had for making such allegations, Adams said the professor could not recognize him when he called on him recently.

“Even though I stood right in front of him, he continued to refer to me as 'Roland', until someone drew his attention to the fact that the person he was talking to was rather Prince Adams,” he claimed.

He said while he agreed that only a qualified medical officer could make any declaration on the health of any person, he still felt the party had a mandate to act swiftly and clear any perceptions people might have about the flagbearer's health status - a situation that could affect the fortunes of the party.

The NDC cadre therefore called on the party leadership to muster courage and 'do something' about the matter, rather than sweep it under the carpet.

“I urge the National Executive Committee, in consultation with Council of Elders of the NDC to muster the political will, and set up an independent medical board to examine and report on the health status of Professor Mills to clear the perceived rumours and allegations.”

Prince Adams described the December elections as a 'Champion of Champions' encounter between the NDC and the ruling New Patriotic Party (NPP), and opined that the floating and undecided Ghanaian voters were very much interested in the health status of whoever wanted to be their next president.

Adams as well fumed over the way cadres in the party had been relegated to the background and maltreated for speaking their minds.

According to him, the defeat NDC suffered in the 2000 general elections offered the party the opportunity to look back and correct some mistakes of the past.

He opined that the day-to-day running of the party must involve mass discussion of issues.

Prof Mills' health first became an issue a few months before the party elected him in December 2006, but it was not until early this year that calls were made for him to be replaced.

For instance, on Wednesday January 30, 2008, the NDC Member of Parliament for Lower Manya Krobo Constituency, Hon. Michael Teye Nyaunu, decided to bare his heart out by holding a mini press conference at Parliament House on the issue.

He told the media that the NDC stood the chance of losing the December elections if it presented Prof John Atta-Mills as the flagbearer because according to him, the professor was sick.

He said even though he had a lot of respect for the professor, he sincerely believed that the party should be bold enough to call for an emergency congress and look for somebody who would withstand the pressure of the December elections.

Not only did his statement shake the party to its very foundation, but it also incurred the wrath of some of his colleagues in Parliament, a number of who verbally attacked him and called him 'stupid'.

A parliamentary aspirant in the Upper East Region also made a similar suggestion a few weeks ago.

Birds also whispered to DAILY GUIDE that the professor almost fell at the Chances Hotel in Ho during his recent Volta Regional tour.
But the NDC flagbearer had always insisted that he was fit for the task ahead.