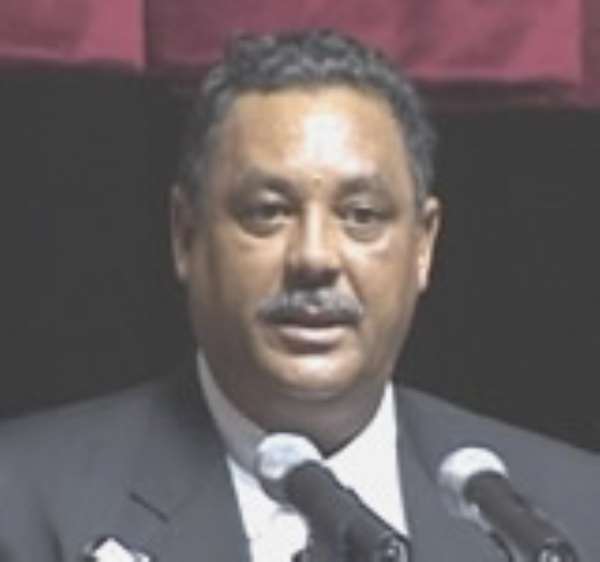 
John Dramani Mahama, the running mate of NDC flag bearer John Evans Atta-Mills stepped into the campaign fray with what commentators have described as a major blunder, when he told Ghanaians Wednesday not to compare the records of the National Democratic Congress and the New Patriotic Party.

Though, he flew to South Africa on Wednesday, and therefore missed the general condemnation of his call against comparing records, going by radio comments yesterday, his statement appears to have exposed the NDC as a party afraid of its own past.

The Chairman of the NPP Campaign Committee, the veteran Jake Obetsebi-Lamptey has advised John Mahama, to do his home work properly before coming out to join the NDC propaganda choir, which shoots blindfold, from the hip.

He described the international loan figures given by the MP for Bole/ Bamboi as merely exposing his lack of depth in the appreciation of national issues.

Mr Mahama said that in the forty years between 1960 and 2000, Ghana's total international loans contracted were nominally $10 billion. But, in the first seven years of the NPP alone $4.4 billion has been contracted. He went on to accuse the NPP of being given too much but delivering too little.

But, in a fast, sharp, incisive rebuttal that same Wednesday, the former Tourism Minister claimed out of the nominal $10 billion, 81 % of those loans went to the PNDC/NDC regimes.

"While, we accept that in nominal terms Ghana contracted a total international loan stock of US$10.004 billion between 1960 and 2000, the (P)NDC should also accept that 81% of this (representing US$8.108 billion) was contracted under their rule; not to mention the amount of grants and receipts from divestiture of more than 300 state-owned enterprises, including revenue from the sales of shares in Ashanti Goldfields," Jake said.

The NPP believes the facts state clearly that the NPP has done a lot more with the loans they have received than the NDC managed to do.

When confronted with the fact that 81 % of the loans contracted between 1960 and 2000 was Under the PNDC/NDC, Alex Segbefia, the NDC Campaign Co-ordinator, said in utter disbelief, "That is not possible!" He was on Citi FM with Uoborr Kutando of the Danquah Institute.

Mr Segbefia reasoned, somewhat that the figure of $8 billion did not correspond with the size of national debt the NPP accused the NDC of leaving behind in 2000.

Jake has also accused the two Johns (John Evans Atta Mills and John Dramani Mahama) of pretending they're offering something "new" but with the old faces.