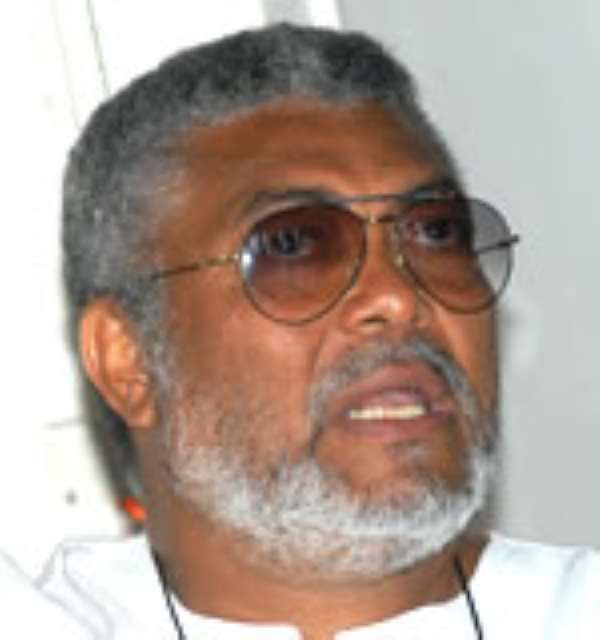 
Former President and founder of the National Democratic Congress (NDC), Flt. Lt. Jerry John Rawlings was missing in action when the entire family of the country's largest opposition party gathered to outdoor what it called 'the winning team'.

Also conspicuously missing from the historic event was his wife and president of the 31st December Women's Movement, Nana Konadu Agyeman Rawlings.

Even though it was later announced that the former first couple was out of the country for an international programme, political observers suspected it could be the beginning of a resolve by the couple to distance itself from the 'dream team' of John and John, which it had kicked against from day one.

Some of the observers were suspicious about the sudden disappearance of 'Chairman Rawlings', the man who went as far as signing the party's manifesto with his blood, from its programmes, and wondered if it was not payback for being sidelined recently.

Others frowned at the organizers, contending that yesterday was strategically agreed upon to make it impossible for the founder and his wife to attend the ceremony.

It would be recalled that the former President was virtually dribbled barely a month ago when the party converged on the Kama Conference Centre in Accra to name John Dramani Mahama as the running mate to Professor John Evans Atta Mills.

Yesterday's event, held at the National Theatre in Accra, attracted thousands of party faithful. The event gave an indication of the party's resolve to be more united than ever, even though the Kwesi Botchways, Kojo Tsikatas, P.V Obengs and Goosie Tandohs, who were said to have rejoined the party, were no where to be found.

However the failure of the founder to participate in selling the 'repackaged NDC' apparently sent the loudest signals as some opined that his towering posture and charismatic presence would have made the event more electrifying.

Some insiders must have smelt trouble miles away and thus sent an SOS message to the hierarchy of the party. Less than 24 hours before the programme, a number of party foot soldiers in Kumasi cautioned about the dangers of sidelining the former President.

The group, calling itself 'Concerned Members of the National Democratic Congress in Kumasi', issued a press statement on Monday, appealing to the national executive to “collaborate effectively with President Jerry John Rawlings in their activities”, saying that was one sure way of fostering unity in the party.

It categorically observed that the former President was being marginalized.

The statement, which was jointly signed by Mustapha Sulemana and Baba Mohammed, spokespersons of the group, cited circumstances which prevailed during the naming of John Mahama as running mate, saying it strongly suggested a calculated attempt by insiders to marginalize the founding father.

“Whereas the founding father was told that the programme would start at 1100 hours, the organizers, through the influence of these people, intentionally started and finished the programme one hour earlier, while there was no communication on the change of time,” it stated.

The group argued that the organizers knew very well that Jerry and Nana Konadu were away in Nigeria, but went ahead to outdoor the team in his absence, and called for its postponement.

At the event proper, the two Johns had a 'good time' as they virtually showered praises on each other.

While Professor Mills described Mahama as his beloved running mate in whom he was well pleased, the latter responded by saying 'ours is a winning team'.

“John is a broadminded person who understands what it takes to become a team player, and I hope he will complement my effort to secure the seat. I have a running mate in whom I am well pleased,” the former vice-president announced to his teeming supporters.

When it was his turn, the Bole-Bamboi MP, who demonstrated more political clout, said Professor Mills was responsible for many of the achievements of the NDC government, and cited the expansion of telephone system in the country among others.

“Let me solemnly say that I am humbled by his decision, and I promise to make our team a winning one,” he said.

The former first couple, it would be recalled, frowned when it was first rumoured that Mahama was being penciled as Mills' running mate.

Mrs. Rawlings, for instance, took a swipe at the former Vice President and dared him on radio to pick his own running-mate for the December elections.

She said the Professor had since 2000 been treated with kids' gloves and that had led to political defeats for the party in the last two general elections. She therefore gave the assurance that the NDC presidential candidate would be given a more robust push.

Konadu, who was then supporting Mrs. Betty Mould-Iddrisu, lawyer and wife of a strong party guru, threatened that she and her 31st December Movement (NDC militant women's wing) had something in store for Mills if he dared make a choice other than Betty.

Even after Mahama was picked, Rawlings told the BBC that Betty would have been a better running mate.

Notwithstanding these developments, yesterday's outdooring of the dream team was very successful and well-attended.