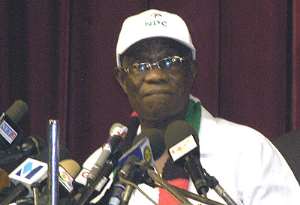 Prof John Evans Atta Mills, Flag Bearer of the National Democratic Congress (NDC), for Elections 2008 yesterday said the task of the Party would be to improve the economy, refresh the national spirit and reunite the people of Ghana.

Prof Mills promised Ghanaians that politics of polarisation would have no place in the country and he would be a President of the whole country, devoid of marginalisation if given the nod in the forthcoming elections.

'I am here to reassure Ghanaians, who are tired of politics as usual, that we are committed to a new type of politics which will foster national unity and a new sense of purpose.'

Prof Mills gave the assurance at the launch of the national campaign of the NDC, which was also used to introduce his running mate, Mr John Dramani Mahama.

The Flag Bearer told the enthusiastic crowd that welcomed him to the National Theatre in Accra at 1454 hours with a chorus of 'Atta Mills, You Are the Most High!' that the agenda of the NDC was for a better Ghana, investing in people, job creation and strong economy, expanding infrastructure and an open and transparent government.

Prof Mills again expressed confidence in Mr Mahama, MP for Bole Bamboi as his running mate, declaring; 'I have a Running Mate, John Mahama, in whom I am well pleased.'