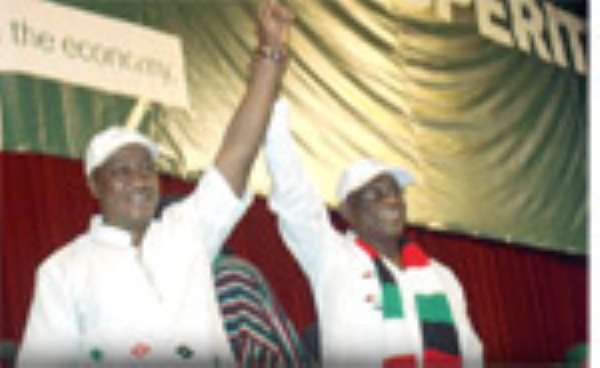 The theme for the occasion, which would be the party's national slogan was: “Our Road to Prosperity-A better Ghana, Investing in People, Jobs and the Economy.”

The auditorium of the National Theatre experienced a rapturous moment when Hon Mahama accepted the challenge to be the running mate of the man called 'Asomdwenhene'.

The introduction of the Bole/Bamboi MP also coincided with the official launch of the party's National Campaign for the 2008 polls.

The venue was virtually taken over by party faithful from all walks of life as they besieged the arena to show their solidarity.

At exactly 1.55 pm, Hon Mahama was welcome with a rousing applause as he set foot onto the stage, flashing the victory sign.

The flagbearer, Prof. Mills arrived shortly after, also to a rapturous reception.

The event kicked off with the introduction of dignitaries at the podium, after which Dr. Kwabena Adjei, National Chairman; Johnson Asiedu-Nketiah, Secretary General; and Daniel Annan, Greater Accra Regional Chairman took turns to address the gathering.

Present at the ceremony were Dr. Mrs. Mary Grant, member of the Council of Elders, party executives, members of the Diplomatic Corps and a host of sympathizers.

The day was also marked with singing patriotic and other religious songs that have been adapted into the NDC slogan to push forward the agenda of winning the 2008 elections.

The atmosphere at the National Theatre was simply electrifying as everybody anxiously waited for the main agenda.

Prof. Mills' speech was heralded by a recital by Akua Serwaa who introduced the flagbearer in a spectacular way.

According to Prof Mills, through his 'House-to-House' campaign he had been able to recognize the real needs of Ghanaians and therefore the NDC's agenda was to help overcome such challenges.

In outlining some of his campaign messages, Prof. Mills stated that he was going to adopt the bottom-top approach where the needs of the underprivileged in society would be taken care of.

“I was not born with a silver spoon in my mouth, and therefore, when I am elected this year, I will not regard it as a Hollywood coronation, but as a God-given opportunity to serve the people of Ghana,” he stated.

He promised to operate a lean government devoid of the usual funfair that goes with the presidential motorcade.

“Atta Mills and the NDC believe Ghana can do better to improve on the conditions of the people,” he indicated.

The NDC flagbearer reminded the New Patriotic Party (NPP) of its broken promises and accused the government of President John Agyekum Kufuor of polarizing the country.

He mentioned lack of jobs promised by the NPP, describing the National Youth Employment Programme (NYEP) as lacking the bite to support the youth.

Prof. Mills gave the assurance that when the NDC is voted into power it would help curb the drug menace, armed robbery and other negative social issues bedevilling the country.

The major thematic areas the NDC hoped to tackle were investing in job creations, a caring, honest and transparent government and expansion of infrastructure.

He called on members of the Diplomatic Corps and the international community not to abandon the country but continue to support Ghana in its quest for development.

Prof. Mills pledged to use truth, honesty, transparency and selflessness as the weapons to execute his government's agenda.
He called on the media to be principled and fearless in their reportage, and keep government on its toes.

He promised to deal swiftly with any member of his administration whose conducts would go contrary to the dictates of government.
“I can assure you that 2008 is our moment of glory,” Prof. Mills indicated.

Mr. Mahama on his part said it was sad that the NPP was calling for the comparison of records and that such an act would be “a recipe for mediocrity”.

He acknowledged the contribution of the NPP government to the developmental agenda of the country and said it was disheartening that NPP never recognized the NDC's performance.

Mr. Mahama as well promised to partner Prof. Mills for a clean campaign devoid of insults, insinuation and other negative tendencies.

He called on his followers to look up to the leadership of the party and not create any problems that could ruin its chances.

Crocodile NDC And Babies With Sharp Teeth Should Stop Sheddi...
4 minutes ago

Prof. Jane Naana Don’t Deserve To Benefit From The Party Raw...
59 minutes ago