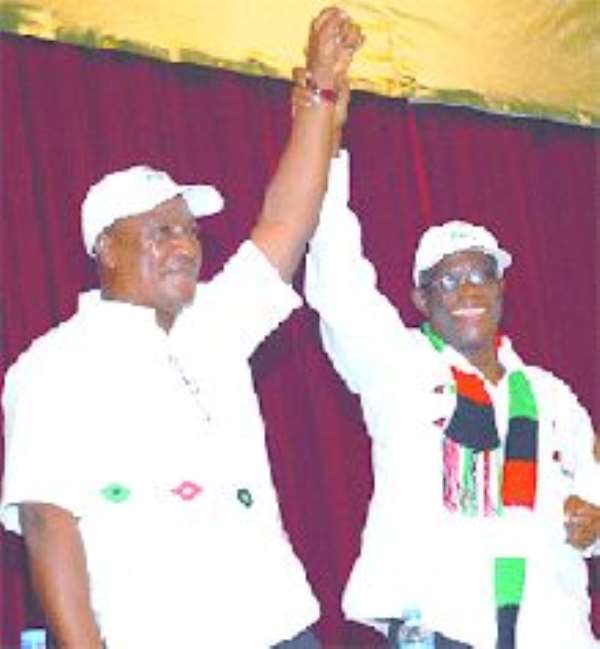 The National Democratic Congress (NDC) yesterday unveiled its future policy direction under which it says all Ghanaians will have the opportunity to realise their dreams.

Launching the party's national campaign, which will focus on four thematic areas — investment in the people, the creation of jobs and building a stronger economy, the expansion of infrastructure, as well as the provision of a transparent administration­ — in Accra, Prof John Evans Atta Mills, the party's flag bearer, said all national resources would be properly managed for the national good.


“I will ensure that resources available to the country, including anticipated oil revenues, are geared in the direction of the four major policies,” he said.


At the launch, where Mr John Dramani Mahama was outdoored as Prof Mills's running mate for the 2008 elections, the NDC flag bearer said the “policies represent the party's vision which will enable us have a Ghana that we will all be proud of”.


The event was attended by both current and former NDC big wigs who had not been very active at NDC functions in the recent past.


However, the founder of the party and former President, Flt Lt J.J. Rawlings, and his wife, Nana Konadu, were not at the event because, according to party officials, they had engagements outside the country.


Prof Mills explained that the four thematic areas were built on change that would bring out more educated children, jobs, housing, healthier communities, food and compassion for those who could not compete.


He said the areas were a culmination of what came out of what he described as “retail campaign tour”, which was also known as door-to-door campaigning, which saw him interacting with artisans, students, farmers, fishermen and the business community.


“I chose this style of retail campaigning tour because a bottom-up approach to people management is the pivot around which effective leadership revolves and it is in listening that you can learn of the real size of the economic burden majority of Ghanaians carry daily,” he added.


Prof Mills took a swipe at the New Patriotic Party (NPP) government, saying that it had spent lavishly on less important things like a presidential aircraft, palaces, lavish anniversary celebrations, among others, while the people whose taxes were being used wallowed in abject poverty.


He said the comfort of his party's elected officials would never be allowed to take precedence over the welfare of the electorate, adding, “Ghanaians now think that the government cannot be trusted to care about their suffering.”


Prof Mills said the problems confronting the country did not lie with the policies of the nation but their implementation, explaining that that boiled down to good leadership.


To restore the confidence of the electorate in the next NDC government, Prof Mills said he would work with men of integrity, selflessness and transparency and cautioned that “should any member of the Atta Mills government act in ways contrary to purpose and character, rest assured that Atta Mills will be swift in acting”.


He said aspects of the behaviour of the NPP government that had made some of the electorate despondent were its failure to fulfil its electoral promises such job creation, a reduction in the size of government, a reduction in the high cost of living, the provision of affordable housing and the pledge on zero tolerance for corruption.


Prof Mills accused the NPP administration of polarising the nation in the past seven years and damaging the country's international image as a major drug transit point.


“I am here to reassure Ghanaians who are tired of politics as usual that we are committed to a new type of politics which will foster national unity and a new sense of purpose,” he said.


He commended former President Rawlings, the council of elders, the national executives and the foot soldiers of the party whom he said were united in their conviction that the party would win the 2008 general election.


Prof Mills urged Ghanaians to hold the NPP to the same standards they had held the NDC in the run up to the 2000 elections and also called on the media to stand fearlessly independent of the government and work for the greater good of the state.


He repeated the party's call on the Electoral Commission (EC) not to succumb to any pressure but undertake its responsibility with impartiality to ensure that the will of the people reflected in the results of the election.


Mr Mahama said he was ready to support Prof Mills to win the election, form the next government, as well as uphold the Constitution and the protection of human rights.


He used the occasion to appeal to the warring factions in Bawku to lay down their arms and foster peace and harmony for the development of the area.