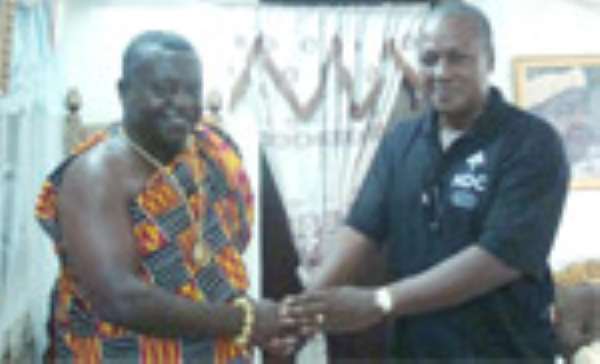 JOHN MAHAMA, the running mate to Prof. John Evans Atta Mills, Flagbearer of the National Democratic Congress (NDC) has cautioned pro-NDC newspapers against the use of bad language in their reportage which could have damaging effects on the chances of the NDC in the forthcoming general elections.

He as well appealed to other media houses that are classified as “anti-NDC” not to run away from the facts and publish or broadcast materials that are true reflections of what would transpire during the electioneering campaigns.

Mr. Mahama made these known when he paid a visit to Nana Otoobur Gyankwasi II, Aburihene, who is also the Omanhene of the Akwapim Anafo Traditional Area.

He was accompanied by Alhaji Abdul Razak, the NDC constituency chairman, William Ntow Boahen, a former District Chief Executive under the NDC administration and some party faithful.

Mr. Mahama was on his way to visit the father of Mr. Boahen who had taken ill, and as custom demands, he could not have gone to visit the sick man without calling on the chief.

Even though the visit was supposed to be a private one, when news got to town that Prof. Mills' running mate had come to town residents came out in their numbers to catch a glimpse of Mr. Mahama.

Mr. Mahama noted that the chances of the NDC at this particular time were brighter, therefore it would be suicidal for the pro-NDC media to ruin that chance.

He therefore called on those media houses to treat other political parties with respect as they would do to him.

Mr. Mahama, who is said to be very well known in the Aburi township and to the Aburihene because he lived there in some years back, said he had a persona of not insulting his political opponents and would therefore not do that, now that he had been made a running mate.

He acknowledged the immense role the media had been playing on the political landscape of Ghana but stressed that “when NDC wins power, it is for all Ghanaians and not for any individual or group of people”.

Mr. Mahama assured the people that whatever virtues Prof. Mills saw in him necessitating his appointment as a running mate would be brought to the fore for the total development of both NDC and the country.

For his part, Nana Gyankwasi thanked Mr. Mahama for the honour done him and pledged to keep him in his prayers to win the December elections.

He however acknowledged the singular position of chiefs in matters of partisan politics and stressed that his doors were open to other political parties.

Nana Gyankwasi as well reminisced the longstanding relationship between him and Mr. Mahama and reminded him to “remember us in paradise” when the NDC ascends the throne.

Also present at the meeting were Nana Afua Asantewaa Adamorobea, queen mother of Aburi and Nana Obisabea Gyawu, the queenmother of the youth.

The chief linguist led in offering special prayers for Mr. Mahama in particular and for the electoral success of the NDC in general.