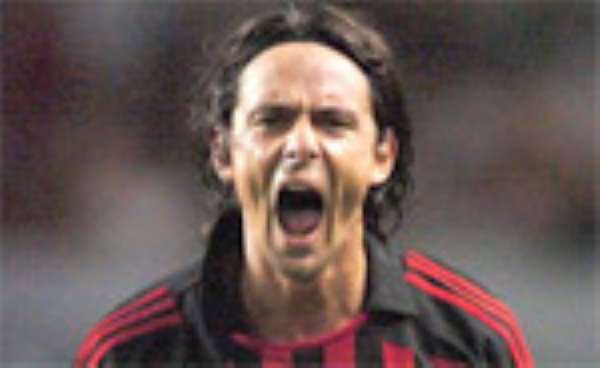 Rarely has a Derby della Madonnina been so highly charged, as Inter could win the Scudetto and rub its rival's nose in it, while Milan needed a victory to maintain any hope of reaching a Champions League spot.

Bragging rights were also at stake, as the Nerazzurri were on track for a fourth consecutive derby triumph.

Nuno Maniche was a surprise choice when Dejan Stankovic failed to recover from a muscular problem, while teen prodigies - Alexandre Pato and Mario Balotelli - were on the bench.

The Rossoneri had the stronger start, with Massimo Ambrosini and Clarence Seedorf firing wide, while Kaka caused quite a few problems for Nelson Rivas.

In first half stoppages, Kaka lobbed a cross into the six-yard box, where Inzaghi's diving header incredibly squirmed wide of the target.

The deadlock was finally broken on 52 minutes, as Kaka got down the right flank and crossed for Inzaghi's header. It was super Pippo's ninth goal in five games.

Instead of fighting back, Inter seemed to crumble as Milan came forward in waves and Seedorf fired over.

Five minutes on, Kaka doubled the lead, as Ambrosini dispossessed a defender for the Brazilian to slide an angled drive into the far bottom corner.