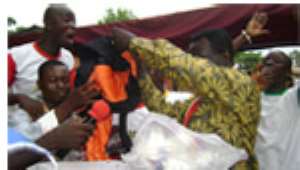 THE Minister of Railways, Ports and Harbours, Professor Christopher Ameyaw Akumfi, has urged NPP youth in the Techiman North Constituency to go all out and win more souls for the party.

Prof. Akumfi, also the NPP parliamentary candidate for Techiman North, emphasized that the youth are the backbone of any political party, saying NPP will therefore support and encourage its youth to engage in active and violence-free campaign.

He was addressing party members at the launch of Mesidan NPP Youth Wing.

He promised to equip all youth wings in the area with sporting materials such as footballs and jerseys so that they would stay fit even as they entertain themselves, and donated a set of jerseys and football to the Mesidan NPP Youth.

Touching on how to wrestle the Techiman North seat from the opposition NDC in the upcoming polls, Prof. Ameyaw Akumfi advised the youth to embark on house-to-house campaign to win more members for the ruling party.

The Ports and Harbours Minister noted that since politics was about numbers, it would be prudent for the youth to make friends with constituents including NDC supporters so that they could explain the policies of the NPP government to them.

“In so doing, you would be able to win some of them; do not engage them in arguments that would spark off trouble, but an educative argument that would convince them to join our party, NPP.”

He reminded the youth and all members of the party to be circumspect in their utterances in respect of Alan Kyerematen's issue.

He said he did not agree with members of the party who said Alan should be allowed to go.

According to him, Alan is a key figure in the NPP and his presence to support the party to maintain power could not be ignored.

Inaugurating the Mesidan Youth Wing, the Brong-Ahafo Regional Youth Organizer, Mr. Alfred Ofori Annye, called on the youth to be united, as that was the only means by which the party could be victorious in the December elections.

He warned that the party would not entertain any youth groupings apart from the official NPP Youth Wing that reports directly to a Constituency Youth Organizer.

The Mesidan Youth Chairman, Mr. Osei Mensah, said the membership drive of the youth wing in the town was fast growing as the number had increased from 50 to 200 members.

He added that they would still fight to win more members by the close of this year.