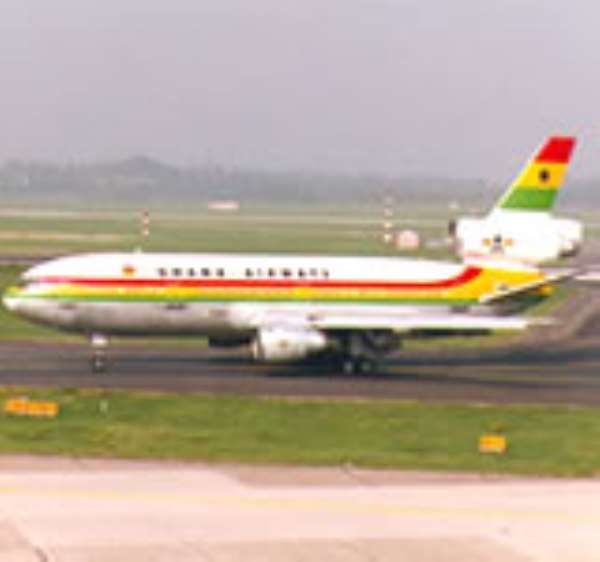 
After Months of intensive consultations and negotiations, the former senior staff of the defunct Ghana Airways are fuming with rage over the inactions of the Government's official liquidator, Mr. J.K Harley.

According to them, the official liquidator has stabbed them in the back after requesting them to submit proposals for their severance payments, with regard to the petition of the overseas-based employees of the defunct Ghana Airways through their representative, Mr. Austin Gamey, a labour consultant.

The ex-staff, who are grumbling over their fate, are now making moves to meet with the Minister of Aviation, Ms Gloria Akuffo, since it is their conviction that the minister might have been misinformed about the issue. Some of the ex-staff members told this paper that it was unfortunate that the acting liquidator had twisted their arms and that they would impress upon their mediator, Mr. Gamey, to as a matter of urgency meet with the sector minister to resolve the impending issue since they have lost trust and confidence in the liquidator, Mr. Harley.

To the disgruntled ex-staff, since the Official Liquidator (OL) has no authority to accept the proposal from them through their mediator, the only antidote to their predicament was to meet the Minister and brainstorm on ideas in the supreme interest of both parties. Mr. Harley, the acting Official Liquidator, in a letter dated April 8, this year, to the mediator; Mr. Austin S. Gamey, said they have no mandate to accept the proposal without concurrence by the government of Ghana.

“As you are aware, funds for the agreed severance packages to the former Ghana Airways staff (GH staff) were made available to the OL by the Government of Ghana (GoG). In view of this the OL does not have the authority to accept your proposal without concurrence by GoG. We hope this explains our situation and would end this issue.” The letter signed by Mr. Harley earlier stated that at various meetings, the OL was of the view that the severance entitlement of the former GH staff have been properly determined based on their prevailing terms of employment as at the date of the company's liquidation.'

Prior to the latest decision of the acting liquidator, which has sparked confusion among the ranks of the ex-staff, the mediator, Mr. Austin Gamey petitioned the Liquidator after various meetings and resolutions agreed upon at said meetings. In his letter dated March 18, 2008, he said with reference to the judgment made on the employee severance and entitlements, each plaintiff agrees to accept payment of three (3) months basic salary for each year served as employee of Ghana Airways up to a maximum of twenty (20) years.

According to him, the applicable salary was the salary of each former employee at the time of liquidation, explaining that the intention of the liquidator to use the 'home salary' of the former employees working outside Ghana was the issue of controversy and hence the petition. Mr. Gamey noted that the petitioners submitted that their salaries at the time of liquidation were salaries they were receiving overseas. “This is a factual situation and is evidenced by appointment letters they were given by the Ghana Airways.”

He said the liquidator cited the practice at the Ministry of Foreign Affairs where home salaries are used in calculating such benefits, as informing their intention. 'The petitioners do not deem this intention as appropriate in view of the fact that Ghana Airways and Ministry of Foreign Affairs have two separate and distinct terms and conditions of Service.” “Further observation was that it seems there is no clear cut precedent to refer to in this matter. The closest appears to be what prevailed in the case of defunct Black Star Line, a similar national carrier.

In that case, officers posted to overseas offices received 60% of their basic salaries overseas and 40% was paid locally.”

Mr. Gamey, on behalf of his clients argued that at the payment of terminal benefits, both the local and the foreign payments were consolidated and the total amount used as the basis for calculation. According to him, being mindful of the constraints faced by the liquidator, the affected petitioners of Ghana Airways are not demanding payments based on 100% of their overseas salaries and that the petitioners should not be over disadvantaged. “In view of this, petitioners have proposed 60% of their basic salary paid to each of the employee overseas at the time of liquidation be applied to calculate payment of three (3) months basic salary for each served year up to a maximum of twenty (20) years,”.

This proposal did not go down well with the acting liquidator and he wrote to end the discourse, saying the OL has no authority to that effect. Former staff of Ghana Airways are battling the government over their severance payment after the company's liquidation.