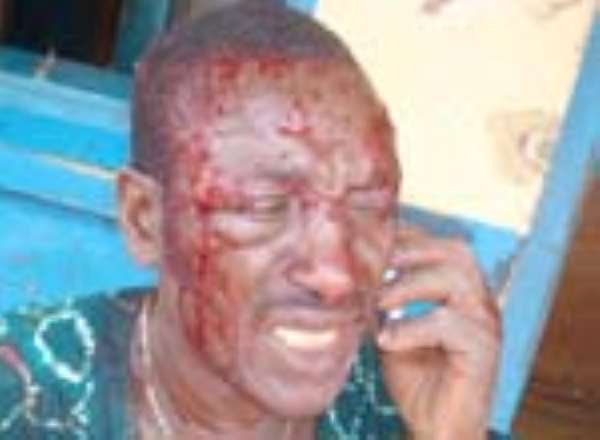 ABOUT FIVE people last Saturday sustained gunshot wounds while over a dozen others received cutlass wounds in a renewed clash between supporters of the feuding parties in the chieftaincy dispute at Anlo in the Volta Region.

The cause of the conflict was not immediately known, with eye witnesses giving different accounts as to what might have triggered the latest clash.

Those who received gunshot wounds were Awoenam Agboada, a 17- year-old girl who has just completed Junior High School (JHS); 16-year-old Justice Golomeke; Modestus Amemu; Alikplim Zate,18; and one other person identified only as Mawunyega.

Apart from Miss Agboada and Master Golomeke, who were still on admission at the hospital at the time of filing this report, all injured persons were treated and discharged from the Keta General Hospital.

In an interview with DAILY GUIDE, Medical Superintendent of the hospital, Dr. Felix Tsidi said Miss Agboada sustained a wound in her right lumbar region (the part of the body above the right hip) from probably a stray bullet, while Master Golomeke sustained some wounds on his right chest.

He indicated that the wounds were not life-threatening and that most of the gunshot wounds on those who reported at the hospital were from stray bullets that might have been fired from locally manufactured guns.

He admitted that if the bullets were to have come from very sophisticated guns it could have been disastrous.

Earlier, a large crowd had gathered at the Anloga Police station to vent their anger on those who had run away from mob action and were seeking refuge, as well as those who were arrested and brought to the police station.

The charged atmosphere in the Anloga township as well as the police station suggested that supporters of the Awadada faction were paying back what was allegedly meted out to them by supporters of Torgbui Sri a few months ago.

One of the victims of the mob action, Worla Bleboo, who had received severe beatings from the mob and was bleeding profusely, had to seek refuge at the police station.

The Awadada faction claimed that some of them were attacked by supporters of Torgbui Sri when confusion broke out during the installation process of the Anlo chief.

The confusion had led to the kidnapping and murder of a Police Constable, Moses Daba, as well as the death of four other residents of the area.

In a 'cry' to DAILY GUIDE, Mr. Bleboo said he was at home with his family when a mob attacked and beat him up mercilessly because he had been tagged as a supporter of Torgbui Sri.

He said the mob threatened to kill him, so he had to run for dear life and seek refuge at the police station.

Another victim, Modestus Amemu alleged that he was at home when he saw one Borlugu Klutse wielding a gun. All of a sudden the man fired some shots at him, resulting in some bullets hitting him in the arms.

They both urged the angry mob to exercise restraint as the matter was being handled by the police.

"They have guns but they will not win. Let's be law-abiding and allow the police to do their work," Mr. Okudzeto appealed to them.

Later in an interview with DAILY GUIDE, Mr. Ahiabor stated that he had a call in the morning, on the day of the incident, that there were some skirmishes between supporters of Torgbui Sri and Awadada and that the supporters of the Anlo chief were wielding guns.

He alleged that he went to Torgbui Sri's residence where the bedlam was unfolding and having convinced himself of the enormity of the situation, he called the police who came in to arrest those holding the guns.

Mr. Ahiabor stated that four people were arrested and were being held by the police for further investigation.

He mentioned that at about 2.00pm on Saturday, he had another call to the effect that the Awadada boys were attacking, beating and harassing people believed to be supporters of Torgbui Sri in the town.

Mr. Ahiabor gave the assurance that the situation was under control and that the Municipal Security Council was meeting to strategise on ways to contain the situation.

He said in the interim some uniformed and plain-clothed policemen and women had been deployed to Anloga to monitor the situation.

Yesterday, calm seemed to have been restored as most of the churches were filled to capacity, with Christians apparently praying for the intervention of the Holy Spirit.

The Keta Divisional Commander, Chief Superintendent Edward Johnson Akrofi Oyirifi, who was on the ground with his men, told DAILY GUIDE yesterday that the police had seized two foreign-made shot-guns.

He attributed the recent mayhem to an incident which occurred on May 26, 2008 at a funeral ground, during which some members of the two factions clashed.

C/Supt. Akrofi Oyirifi said to contain the situation, there were reinforcements drawn from the Volta Regional Police Command in Ho as well as the Sogakope and Keta Divisional Commands.

He gave the assurance that calm had been restored and that there was no cause for alarm.