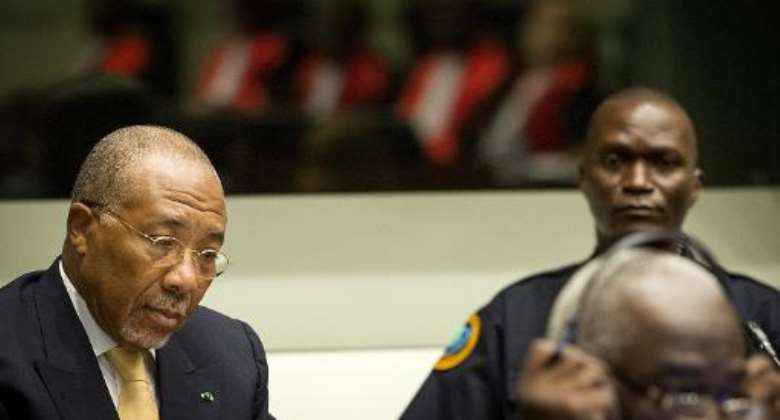 Former Liberia's President Charles Ghankay Taylor (L) waits in the courtroom of the Special Court for Sierra Leone in The Hague prior to the appeal judgement on September 26, 2013. By Koen van Weel (Pool/AFP/File)

London (AFP) - Liberian ex-president Charles Taylor, the first former head of state to be sentenced in a war crimes trial by a global court since 1946, was once one of Africa's most feared warlords.

The 65-year-old who once notoriously compared himself to Jesus was transferred from The Hague to London Tuesday to serve the rest of his 50-year sentence.

He lost an appeal last month over a catalogue of gruesome acts committed by the Sierra Leonean rebels he aided and abetted during that country's 1991-2001 civil war, one of the most brutal in modern history.

Testifying during his initial trial at the UN-backed Special Court for Sierra Leone in 2009, Taylor called the 11 charges of murder, rape, conscripting child soldiers, enslavement and pillaging against him "lies".

"This whole case is a case of deceit, deception, lies," Taylor said. "I am not guilty of all of these charges, not even a minute part of the charges."

With his close-cropped salt and pepper beard, tailored suits and gold cufflinks, the former rebel cut an elegant figure in court as he listened impassively to witnesses recounting the atrocities of which he was accused.

The trial followed a life marked by deep involvement in conflicts that blighted several African countries, driven according to prosecutor Brenda Hollis by Taylor's "greed and lust for power".

He is widely seen as the most powerful figure behind a series of civil conflicts in Liberia and its eastern neighbour Sierra Leone between 1989 and 2003, which left some 400,000 people dead.

It was not enough for Taylor to plunder his own west African state of Liberia, encourage rebellion in neighbouring Ivory Coast and make Guinea anxious about its own potential for revolution.

The "intelligent, charismatic manipulator", in the words of the prosecution, also chose to arm and assist the notorious Revolutionary United Front (RUF) in Sierra Leone.

He did so in exchange for illegally-mined "blood diamonds", fuelling a deadly decade-long conflict, where the RUF spread terror by killing, raping and chopping off the limbs of thousands.

A thrice-married lay preacher with an economics degree from Bentley College in the US state of Massachusetts, Charles Ghankay Taylor rose to power on the back of the rebellion he launched in 1989 against Liberia's then-military ruler Samuel Doe.

He had joined the Liberian civil service under Doe -- who himself seized power in 1980 and presided over an authoritarian regime -- but was sacked in 1983 for embezzling nearly one million dollars in government funds.

He skipped the country, returning to the United States where he was jailed on an extradition warrant. But he escaped 16 months later and disappeared, resurfacing in December 1989 at the head of a rebellion backed by Libya and reportedly Burkina Faso.

His National Patriotic Front of Liberia (NPFL) earned a reputation for extreme violence and was among the first to force children, some as young as 10, to carry guns.

"Jesus Christ was accused of being a murderer in his time," he once told the BBC in an interview.

Seven grim years of war wearied the Liberian people, who in 1997 elected Taylor president. One of his campaign slogans was: "He killed my Ma, he killed my Pa, but I will vote for him."

His overwhelming victory was largely attributed to widespread fears among Liberians that he would resume the civil conflict if he lost but his win at the polls brought little relief to the country of 3.3 million people.

Two years later, a second rebellion took place, this time against Taylor. Fighting -- with the capital Monrovia encircled -- ended when Taylor fled to Nigeria in 2003.

He kept a low profile, living in a seaside villa and having a luxury car with diplomatic plates, until Nigeria in March 2006 bowed to international calls to extradite him.