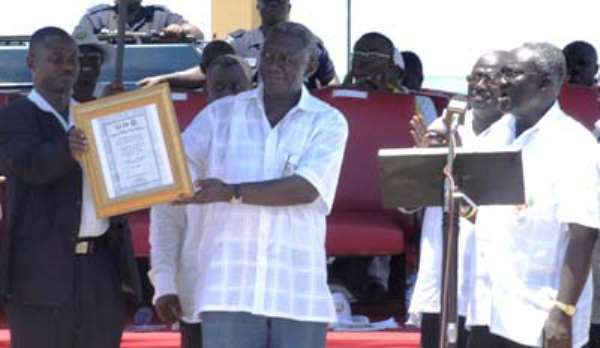 President Kufuor displaying the Labour Leadership Award presented to him President John Agyekum Kufuor, addressing his last May Day parade, yesterday saluted the nation's workers for the show of maturity and sense of appreciation of the public good that had helped to steer Ghana to growing success.

The economy now was stable, robust and resilient, he said, adding that through pragmatic policies and measures and prudent management, a strong foundation had been made.

President Kufuor nonetheless, acknowledged the phenomenal global challenge in the wake of soaring crude oil and food prices, saying Ghana had not been spared the effects of these problems.

Currently, there are increases in utility tariffs, prices of imported goods and food. President Kufuor assured the nation that there was adequate food in the system, despite the devastating floods that hit the Northern Regions and parts of the Western Region last year.

The Ministry of Food and Agriculture, he said, had been directed to ensure proper marketing and sales of agricultural produce to even out availability of food throughout the country.

Additionally, arrangements were underway to stockpile grains to make sure there was food security at least for the rest of the year.'The point is that, Ghana should show awareness of what is happening around her and appreciate that but for good governance, she might have been suffering the same fate as others in the neighbourhood'

'Thank God, we are getting by. So we should hold together and not hype or allow ourselves to be incited by the problems to disrupt the smooth development of our socio-economy.'

On the recent strike by railway workers, President Kufuor said the Government was sourcing more than one billion dollars to re-activate and make functional the virtually moribund rail system.

Already, it has made available 90 million dollars to leverage a consortium to find the money for the project, planned to cover the Western line, Accra-Kumasi and its extension to Tamale. He also said he was arranging to meet with the leaders of the railway workers to review their situation.

President Kufuor expressed optimism that within the next few years the railway sector would come into its own as a major player within the socio-economy.

President Kufuor also touched on the implementation of the planned Public Service Pay Policy in a fair, transparent and systematic manner, using best practices and said a team of consultants had been engaged to work on this. The policy required extensive consultations with identified stakeholders including organised labour to make sure there was comprehensive dissemination of policy objectives, acceptance and ownership.

President Kufuor noted that it was only by doing this that the integrity and permanency of the policy could be assured. He said he was aware of the concerns raised about delays in the submission of the report and reminded the public to accept that this was a major exercise that ought to be done well from the outset to avoid more difficult problems in the future. President Kufuor therefore called for restraint.

Mr Kofi Asamoah, Acting Secretary General of the Trades Union Congress (TUC), called on the Government to provide the National Labour Commission with the necessary resources to perform its statutory functions. He warned that the current situation, where the Commission operated from only the headquarters in Accra, in respect of labour disputes nationwide and with thin staffing and facilities could condemn it into a dead entity.