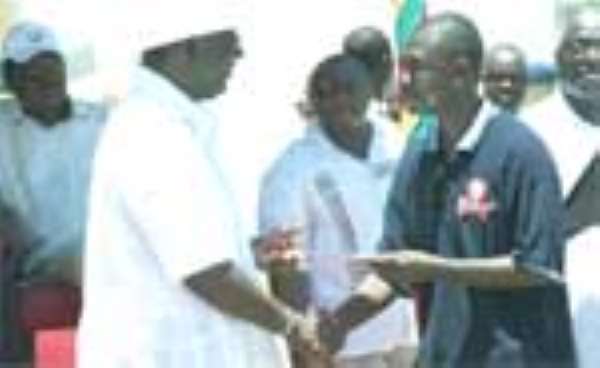 PRESIDENT JOHN Agyekum Kufuor yesterday used his last May Day celebration to call on his fellow politicians to desist from making statements which cast a slur on the Electoral Commission and raise doubts about its independence.

“We should be able to desist from pronouncements which give rise to undue skepticism and work together with the Commission to ensure transparency, fairness and peace. Any misunderstanding arising from the elections should be subjected to due process.”

Addressing a large number of workers at the Independence Square, the President, who was later honoured for his constant support for organised labour since assuming office, re-affirmed government's resolve to ensure that the positive international image of Ghana as a beacon of democracy was maintained and improved upon.

For that positive assessment to be validated, political parties should see themselves as part of the constitutional organs that they indeed are, for running elections.

“They should therefore behave in the letter and spirit of the constitution to assist the process and be law-abiding as anything else will be illegal and detrimental to our progress,” he noted.

He reminded the National Media Commission, the Commission on Human Rights and Administrative Justice, the National Commission on Civic Education and Ghanaians in general, of their constitutional roles in upholding the country's democratic values. In that regard, he suggested that the nation live the National Anthem's refrain: “Help us to resist oppressors' rule with all our will and might forever more.”

The President, whose two-term maximum constitutional mandate ends next January, announced that his government was supporting the leadership of the judiciary to modernize the courts, provide raining for personnel and endeavour “for justice not only to be done, but to be seen to be done,” adding “the leadership of the judiciary should work to make judicial independence a reality in this country.”

On the labour front, Mr. Kufuor was thankful to God that despite some difficulties, the country had not sunk into the abyss like some of its neighbours.
“Ghanaians are a great people who have never been discouraged by temporary difficulties.

Let us therefore maintain our resolve and our vision of creating a just, humane and peaceful nation, aspiring to a middle income economy in the foreseeable future. Let us therefore continue to work hard and be productive. Let us have faith that God will help us to achieve this.”

President Kufuor, who commended and described the country's labour front as calm and co-operative, disclosed that a team of consultants had been engaged to come out with a single spine pay structure to become the Public Pay Policy in due course.

Government, he said, was saddened by the strike action by workers of the railways, which had been on-going for some time now; reminding them of what government was doing in the long term to make the sector a viable component of the economy.

“In the meantime, outstanding salaries and wages of the workers would be worked on. Demands for pay rise should however be made realistically, in relation to productivity.”

“My 8-year tenure as President has witnessed very positive engagement with organised labour. This has impacted positively on the socio-economic development of the nation.

“But between labour and employers, there is still room for improvement in the relationships,” said the President.

Before receiving his ward from the labour front, the President thanked organised labour for co-operating with him, and requested that “you continue to co-operate with me to the end of my stewardship and extend the same co-operation to the next President.

The Acting Secretary-General of the Trades Union Congress of Ghana, Kofi Asamoah, said organised labour would continue to help in the consolidation of the country's democracy.

The group's love for democracy informed its choice of theme: “Deepening Democracy in Ghana: The Role of Organised Labour” for this year's celebration.

Konadu Not Withdrawn From 2020 Elections — NDP
35 minutes ago