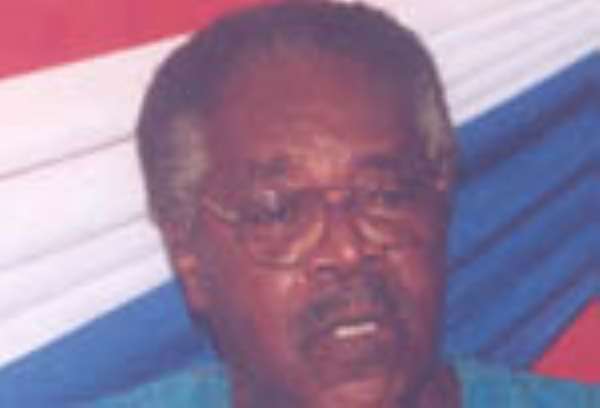 A foundation chairman of the NPP, Mr. B.J. da Rocha has spat at what he described as John Alan Kwadwo Kyerematen's bluff, asking the defeated presidential aspirant to go away and return no more to the fold of the party.

Mr da Rocha, the first National Chairman of NPP, was the mediator in the efforts to get Alan to rescind his decision and this reaction comes in the wake of the latest correspondence from the one-time Trade Minister in which he said there is no going back on his departure from the party.

In a strong-worded press statement, the NPP former chairman said Alan acted in bad faith, especially when all the parties in the mediation had agreed that no press statement should be issued until the party's national executive had been briefed, indicating that Alan had his own agenda.

A statement from Mr. da Rocha, robust and revealing, explained that it would be inimical to the interest of the party to receive Alan into its fold because “he would become a disruptive factor in the party- a stumbling block and a loose cannon.”

He noted that the NPP has an election to win, adding, “We should concentrate our efforts on the task ahead and let him go his way in peace.”

The matters about which Alan complained, he said, “are not so grave, so earth-shaking as to make a loyal member of the party to quit it summarily and unceremoniously”.

Mr. Kyerematen complained about a number of issues which he said informed his decision to quit the NPP; among which was that his supporters were being harassed.

Mr. da Rocha in his reaction to this, noted that “these complaints are like flea bites compared with what many loyal members of the party have suffered and endured in the past without even contemplating leaving the party.”

Continuing, the legal luminary observed that it would be a bad precedent to allow one person to dictate to the party “the terms on which he will continue to be a member. I think Mr. Kyerematen is bluffing the party. The party should not tolerate such bluff.”

The party elder particularly took exception to the concluding portion of Alan's statement which he said “is pregnant with meaning”.

The third paragraph of the said Alan statement reads: “We must also not lose sight of the fact that national interest is superior to the interest of any single party. In this regard, I will soon give a firm indication about the role that I expect to play on the political landscape in the country. This I believe will bring hope and confidence to all Ghanaians irrespective of the political or religious affiliation or ethnic background.”

Mr. da Rocha interpreted the foregone as indicative of Alan's intended political role outside the NPP, maintaining, “He has no deep-rooted commitment or loyalty to the NPP”.

The statement gave a comprehensive story of how the umbrage of Alan was managed until the angry former NPP man brought the matter to the public domain in the form of a resignation.

Narrating the story, Mr. da Rocha recalled how he was approached to wade into the matter with a view to getting Alan to rescind his decision.

He added that it was decided that nothing about the efforts should be let out in the public yet.

“I was approached through the General Secretary of the party, Nana Ohene Ntow to act as a mediator and see whether he could be persuaded to change his mind,” he said.

Two meetings, he said, were held with Mr. Kyerematen, both of which the General Secretary attended.

He described the meetings as very cordial. “I told Mr. Kyerematen that he should not have written a letter of resignation. He stated at length that there were certain fundamental issues which had propelled him to resign and unless these were addressed, he would stand by his decision to quit,” Mr. da Rocha stated.

He disclosed that when he told Alan to rescind his decision unconditionally so that his concerns could be addressed, the aggrieved man responded that while he respected his opinion and advice, he could not agree.

The party elder said he notified Alan that because the party is in the middle of an election campaign it could not find time “to arbitrate what he saw as a dispute between him and the party. I suggested to him that many within the party would interpret his action as lack of loyalty and commitment to the party. His response was that 'if anybody thought so, so be it”.

A second meeting, Mr. da Rocha recalled, took place on Tuesday 23rd April 2008 and this, he said, ended with a proposal by him that it be reported through him (da Rocha) to the National Executive for it to take a decision.

The decision, he explained, was whether the executive would satisfy his conditions for returning to the party or simply accept his resignation.

At the time of the meeting, Mr da Rocha pointed out, the National Chairman was out of the country and this, he added, Alan was aware of.

Continuing, the NPP bigwig said it was mutually agreed that “no public statements should emanate from either of us until I have made my report to the National Executive, which I could submit only after the National Chairman had returned.”

He said he was surprised at Alan's statement on Thursday, a behaviour he considered unacceptable.

Mr. Kyerematen has been in the news these past few weeks because of his unexpected resignation from a party whose flag he sought to bear during the forthcoming polls in the country but was beaten by Nana Addo Dankwa Akufo-Addo.

While some within the party have expressed remorse at the action, others see it as an expression of his angst at losing out to Nana.

There have been efforts at getting him to rescind his decision but with this latest development from a respectable elder of the party, it appears that the Rubicon has been crossed, a final adieu to the NPP.