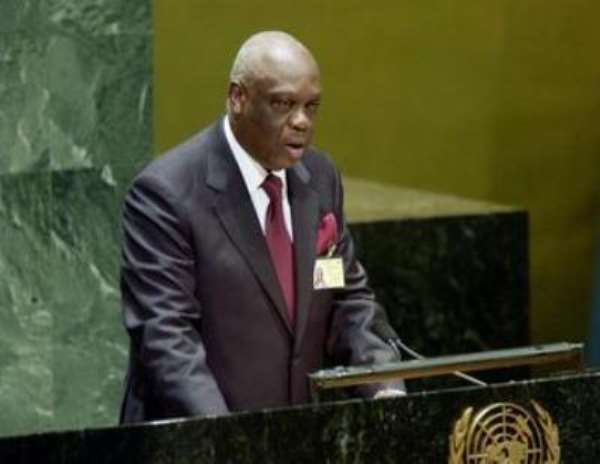 He observed that this year's election was a test to the nation's steadfastness once more, and that all Ghanaians therefore owed it a duty to stand for democracy, exercise their franchise and if need be, assist the structures of state to deliver.

The Speaker, sounded the caution, when he addressed a cross-section
of the public at the Central Regional Parliamentary outreach programme on
the theme: 'strengthening the legislature through public engagement' at Cape Coast.

The forum, which aimed at bringing Parliament to the door-step of the people to enable them to air their views as well as question Parliamentarians about issues on their minds concerning the work of the legislature, was organised with support from the Friedrich Ebert Stiftung (FES)

It was attended by chiefs, Municipal and District Chief Executives, Members of Parliament, public and civil servants and students. 'We are all one people with a common destiny but probably differ in the mode that things should be done. Ghana is our nation and we must help to keep the peace for our generation and generations yet to be bornm,' he stressed.

Touching on the work of Parliament, the Speaker noted that for parliamentary democracy to thrive there was the need for the public to understand and engage with parliament, adding that 'parliament cannot as a result, be an entity onto itself and must relate to the people and move along with them, and vice versa.'

'Indeed it serves no one any good if it becomes difficult for the public to understand what their elected representatives are doing,' he declared, and urged participants at the forum to therefore endeavour to ask about their activities and suggest ways they think can strengthen parliament-public discourse.

The Speaker, briefed the participants about the work of parliament, and explained that most of its work was executed at the committee level, and said it had developed an Enhanced Strategic Plan for 2006-2009, that lays the foundation for a concerted push critical to address priorities for an effective parliamentary institution for the country.

He expressed the hope that by the end of that period, the capacity of parliament would have been improved to enable it to carry out its responsibilities more effectively than ever, adding that the expansion of physical infrastructure to provide a conducive working environment for MPs and staff to discharge their mandate was being pursued.

The First Deputy Speaker, Mr Freddie Blay, for his part, said democracy would be more entrenched, if society played its part well and kept Parliament 'on its toes,' adding that democracy had served the country well for the past 16 years, such as enabling an improvement in the economy.

He debunked the notion that some Parliamentarians were selfish and sought after their own interests, after they have been elected to Parliament, stressing that the welfare of the people was paramount to all Parliamentarians.

The Regional Minister, Nana Ato Arthur also said this year's general election was a challenge and that it behoved on all Ghanaians to ensure its success, and echoed concerns about the non cordial relationship between some MPs and Chief Executives and expressed the hope that the issue would be resolved once and for all.

Ms Kathrin Meissner, Resident Representative of the FES said the forum was in the right direction because parliament belonged to the people and was therefore accountable to them. The participants on their part expressed their views on a wide range of issues, including echoing suggestions that District Chief Executives should be elected and assembly members should be elected on partisan basis.

Concerns about the inability of the disabled to secure jobs, the absence of most MPs during parliamentary sittings and the need for precautionary safety measures at the oil exploration and drilling at Cape Three points came up and were addressed by the parliamentary team.