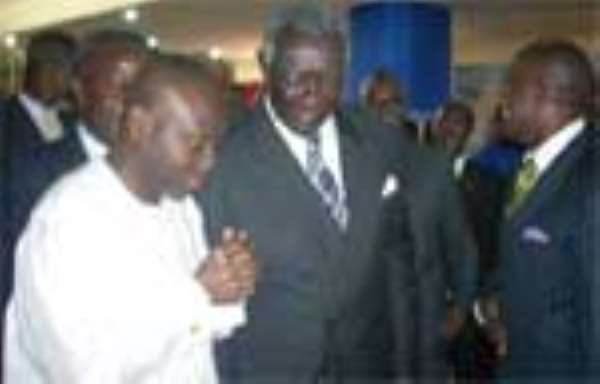 PRESIDENT J.A. Kufuor yesterday launched the e-zwich smartcard system with a call on those responsible for payment of wages, salaries, pensions and other social support funds to bring transparency and integrity to the payrolls.

The National Switch and Smartcard Payments System, popularly called the e-zwich, is a brainchild of the Bank of Ghana, the country's central bank, designed to link the payment systems of all licensed banks and non-bank financial institutions such as credit unions, money transfer institutions, rural banks and savings and loans companies.

The President, who described the banking novelty as a “cutting-edge technology”, stated that the system was an integral part of government's overall vision of making the country the gateway to the West African sub-region and transforming her into a major financial hub, and indeed a significant player in the global financial market.

“This card, which is safer and more convenient, should also help solve the problem of paying cocoa farmers with cash or Akuafo cheque. Steadily, government will facilitate the use of the e-zwich as a common mode for payment transaction by all,” he said.

The challenges of globalization, President Kufuor said, were immense and Ghana was ready to face them.

“Since assuming office, this government has acknowledged this global reality and has focused priority attention on the macro-economy.

“It has pursued policies to develop and modernize the financial sector to enable it to play a key role in mobilizing resources for increased levels of investment, economic activity and employment.”

With these reforms and stability in the macroeconomic environment, the nation was witnessing dramatic growth in the banking sector, with several banks operating throughout the nation.

“Despite this impressive growth of financial institutions there are still a lot of people outside the financial system,” said President Kufuor.

He expressed unhappiness that about 80% of the eligible population is still either “un-banked” or “under-banked” with no access to financial services.

“As part of this transformation, small and medium scale businesses and those involved in micro-credit transactions must be encouraged to take advantage of this new platform to be linked to the financial system so as to benefit from the various services that the financial sector can offer.”

Mr. Kufuor was extremely happy that the e-zwich payment terminals would not rely solely on electricity and telecommunications to operate, saying “this system is versatile and can therefore be extended to all parts of the country, including areas without electricity or access to telephone network”.

Before President Kufuor launched the new system, a video presentation on the advantages of its biometric and other security features was shown to the large audience, mainly made up of bankers.

Those who endorsed it included Kwadwo Baah-Wiredu, Finance and Economic Planning Minister, Dr. Paul Acquah, Governor of the Central Bank and his deputy, Dr. Mahamudu Bawumia.

The President later was made to symbolically transact the first e-zwich business on a huge machine with a card as large as two notebooks combined. “I don't think this is convenient,” he joked after slotting the card in.