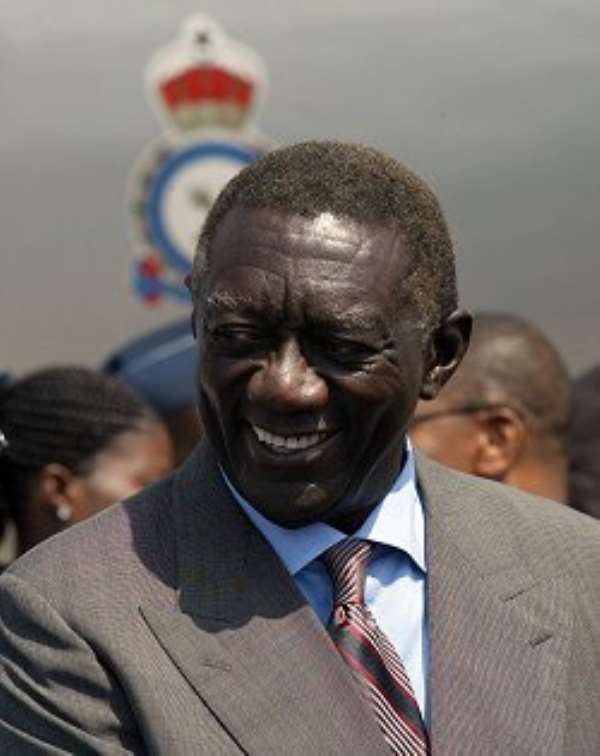 As per the constitution of the land, the President has the right to hire and fire Ministers. We are practicing an executive Presidency. The sitting president is one who has achieved a lot during his regime in all spheres of national life. However, one judgment of his which most people have had cause to almost always challenge is his cabinet reshuffles. The recent swapping of Honorables Oboshie Sai Cofie and Asamoah Boateng is no different.

This is a woman who is a successful media practitioner by all standards (at least that is how I see it). Look at the innovations she brought into the media landscape. Even I, a distant observer, could feel it.

Though I don't think it was a subtle and calculated move to woo the media, her visits to media houses and other places of interest did indeed achieve that. Not that the media sung and danced to her tunes, but they saw her as one who was one of them and recognized and appreciated them for who they were. It established a closer bond between them such that I could sense a visible presence of government in the media positively.

Apart from the initiative giving the government media presence, it also brought government another step closer to the people. This was an Information Minister who for the first time will go to the extent of interacting with market women, schools, chiefs, hospitals, etc, to educate them on government policies and programmes. Watching the report in the news, you could see the people she interfaced with as people who for once felt important such that a Minister of State visited them at their doorsteps.

Is this not the Minister who took journalists on a tour of Ghana @50 project sites when too much noise was been made as to whether monies was been put to judicious use or not. Is she not the one who silenced Kobby Acheampong when he was running amok with lies about renovations at the President's residence?

I could indeed appreciate the fact that the Ministry asserted its rightful place in government and the society during her stewardship. Her interventions, whenever necessary, were timely and very useful. I rate her as a number one Minister who indeed knew what her mandate was all about.

So what could have informed such a move by the President? Is it about time the nation considered reviewing the constitution to compel the President to give reasons for such infamous decisions?

Someone whispered to me that the decision has got to do with the egos of some people who, out of pettiness, think that she was becoming too popular and powerful. Petty because if it was true, was it on a silver platter or is it that she was working to earn her influence and respect?

Another hint of such an unpopular decision was taken is that it has got to do with some interest groups within the ruling party, the NPP. To some people and the powerful people behind them, her continuous exposure and surge places them at a disadvantage of getting the running mate slot of the party. They had no option therefore, but to lobby the President to send her where her visibility could be minimized, and they succeeded.

My sources also tell me that the move is to inject some sense of urgency, vibrancy, and robustness into putting out government information, especially in this election year, as confirmed by the in-coming Minister in some radio interviews. What a miscalculation, if this is true? Who says information dissemination is like being in a boxing ring? Eh! Asa B., beware o, don't rush!!!

In fact, if it is indeed true that the above reasons are what informed the decision, then it was a grievous mistake and a non-starter. My admonishing to the out-going Minister is that she should not be down-hearted. What makes something a problem or an opportunity is not in how it is or looks like, but how it is approached. It is a matter of attitude. I encourage her to take it up as a challenge and muster the needed courage and determination to excel and brighten the corner wherever she finds herself. There is a window of opportunity anywhere. Grab it and fly high and prove to everyone that you are an achiever. I will be disappointed as an admirer of not you but your works, if you are unable to make it.