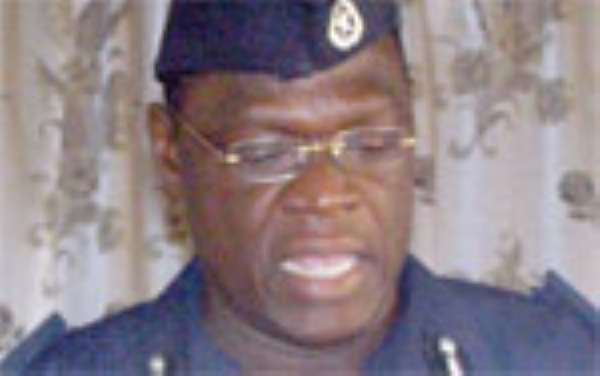 THE Eastern Regional Command of the Police has called on political parties in the country to be guided by events in Kenya and Zimbabwe and not do anything that will mar the peace that Ghanaians are currently enjoying.

The Regional Commander, Assistant Commissioner of Police (ACP) George Anko-Bil, who made the call, predicted that the December general elections would be so crucial especially when the opposition National Democratic Congress (NDC) had had two terms of political power with the incumbent New Patriotic Party (NPP) just about to complete its two terms of power.

He said it would be absolutely important for all the political parties to educate their members to shirk their "do and die" mentality and also play to the electoral rules fairly.

ACP Anko-Bil, who has just been posted to the region to take over the regional command from Deputy Commissioner of Police (DCOP) Felix Asare-Darko who is going on retirement, was addressing representatives of political parties in the Eastern Region at Koforidua.

He noted that the meeting was also to enable him introduce himself to them because of the important relationship he was going to have with them in the course of the year, so that they could work together to ensure a very successful elections in the region in December.

According to the Commander, election times were normally tensed periods when people's destinies were put on line with different tolerance levels that have to be contained within acceptable limits.

He stressed that it was therefore incumbent on political parties, the Electoral Commission, the Police and other security agencies, the media, the citizenry and civil society to ensure that everybody “understands, appreciates and co-operates” in the process of electing people who are capable of taking the nation to the next level of development in a peaceful manner.

The Police Commander acknowledged that the police have a huge responsibility to ensure peaceful and fair elections, and said the regional command was going to ensure that police officers who would be detailed to monitor the elections were well trained.

"We resolve to apply the law fairly but firmly in order to uphold the law and order in the region," he told the political party representatives.

He appealed to political parties to ensure that their campaigns were devoid of provocative utterances; and they should also stick firmly to the laws and regulations guiding the holding of rallies and public events.

The Regional Manager of EC, Mr. Paul Boateng, who was also at the meeting, asked all Ghanaians to see free and fair elections as the collective responsibility of all stakeholders like the political parties, the police, the media, the voters and the courts, and not as the responsibility of only the EC.

He asked the media to effectively play their watchdog roles and not misreport or sensationalize any electoral irregularity to break the country.

"The media people hold the key and they can make or unmake the nation with bias and inaccurate reportage."

He also appealed to the police to be fair in their dealings and not take sides during election times.

Mr. Joshua Atta Mensah, the NDC parliamentary candidate for New Juaben North, who was one of the NDC representatives at the meeting, expressed concern over situations where the EC trains the electoral officers, party agents and the police personnel separately.

He said when that happens, any of these people could get confused about each other's roles and functions at the polling station, which according to him brings a lot of mistrust.

He therefore appealed to the EC to train the electoral officers, the party agents and the police personnel together so that they would all know each other's role and responsibilities to help them co-operate with each other.