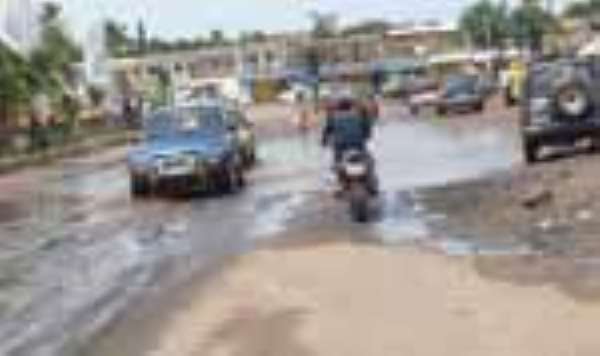 Accra and some parts of the country witnessed a major downpour which wreaked havoc to some residents living in low-lying areas.
The rain, which started at about 3.30am on Wednesday, increased in intensity as rooms started getting filled with water.

The drainage system was not particularly helpful because they were choked with all manner of garbage from nearby houses.

When the downpour became intense, the force eventually pushed the garbage away but with disturbing effect at places like the Circle area which is a confluence of major gutters from some parts of the city like Nima, Accra New Town and others.

Areas like the Graphic Road, Malam, Darkuman, Kaneshie First Light and parts of Okaishie among others were not left out in the flooding which followed the downpour.

Many residents hit by the flooding could not help wondering what things would look like when the rainy season sets in full swing towards mid-June or so.

Already, the Ghana Meteorological Services Department has posted a picture of heavy downpour across the country.

Farmers in the region, which is considered the food basket of the country, were full of joy when the rain started to fall.

The downpour meant a lifeline had come for their withering plants.
The rains started on Tuesday and continued until Wednesday, thus keeping most people indoors as it lasted.

There was little or no havoc to property during the storm which preceded the downpour.

At Atebubu, Nkoranza, Yeji, Techiman and their environs, the rain continued until 10 am on Wednesday. The situation was no different in the Ahafo side of the region.

In an interview with Regional Meteorological Officer, Mr. Nkoom, he assured farmers that the rains will continue for sometime, and advised them to continue planting.

For the past two months, the rains have been erratic, making it difficult for farmers to make mounds to plant yam.

Farmers who anticipated early rains and planted their maize run into losses as all the plants failed to germinate or withered away soon after germinating.

The price of maize in the region, which is a major producer of the crop, has skyrocketed. Whereas a bag of maize was sold for thirty Ghana Cedis in March, the price has moved to fifty Ghana Cedis at the time filing this report.

In Kumasi, the downpour which started as early as 6am disrupted business activities in the Garden City.

The downpour was characterized by a three-hour rainstorm with intermittent thunder and lightning, which kept workers from both the formal and informal sectors indoors until it was convenient for them to go out.

The newspaper business particularly suffered most as vendors who had converged on the Kejetia terminal, where they collect their supplies, were unable to do so.

There were neither casualties nor property loss, according to the Police, in spite of the heavy downpour.

The flooding at flood-prone areas in the Garden City suffered minimally and the reason for this was attributable to illegal structures by estate developers and individuals on waterways.

The lessened incidence of flooding was said to have been as a result of construction of roads and drainage in various parts of the city like the huge drainage at Bremang Junction.

Some concerned residents have appealed to the Kumasi Metropolitan Assembly to enforce its bylaws to prevent people from putting up houses on waterways to avoid flooding.