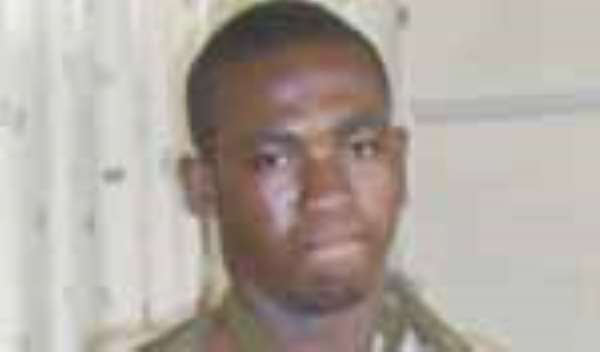 ERIC ALFRED Zieme, aka Kumasi Ataa Ayi, the 25-year-old lone gunman who was recently shot in his left thigh when he attempted escaping from police custody has been charged with attempting to bribe a policeman 12 days ago with 3,500 Ghana Cedis to facilitate his second escape attempt.

The police man, Sergeant Victor Boame, who was detailed to man the cell in which Eric was being kept was said to have offered to assist the suspect to unlawfully escape so he could collect the money afterwards at Dichemso, a suburb of Kumasi.

The deputy Ashanti Regional Police Commander, ACP Bright Oduro confirmed that to make the plan work, the police man gave the suspect a hacksaw blade to enable him cut the metal gate of the cell.

As a first disciplinary action, the Regional Police Command has interdicted Sergeant Victor Boame of the Mobile Force Unit while a final severe action against him is being considered but the suspect is now under tight security.

According to Mr. Oduro, but for the vigilance of Superintendent E.A Akunnor, officer commanding the police training school in Kumasi, who in the company of Assistant Superintendent E. Agyemang detected that the gate to the cell had been tampered with, Eric would have escaped unnoticed.

Mr. Akunnor who was on an inspection tour of the regional police command found the hacksaw blade near the gate of the cell on reaching the cell where the suspect was being detained.

He said upon interrogation, the lone ranger, who personally confessed to killing most of his victims using an AK 47 assault rifle, mentioned Sergeant Boame as the security man who offered to facilitate his escape at an initial proposed fee of GH¢5,000.

Eric was said to have told police investigators that he and the interdicted police officer later settled on GH¢3500. Reports say Boame was the same officer who allegedly aided the suspect to embark on his first unsuccessful escape attempt, during which he was shot in the thigh.

Mr. Oduro indicated that Sergeant Boame was on night duty at the Mobile Force station between April 6 and 12, this year, where Eric was on remand.

During the period, the defaulting policeman told the suspect to gradually and carefully cut the hedges of the metal gate at night when he was on duty to avoid detection.

He arranged with the suspect to finish cutting the hedges by April 12 so on that fateful day the deputy regional police boss said the Sergeant took a sick leave.

The plot, DAILY GUIDE gathered, was that the police man had planned to arrange for a taxi so that immediately Eric escaped he could flee to Dichemso where he would collect his money.

Meanwhile Sergeant Boame has denied his involvement in the suspect's escape attempt, according to Mr Oduro, saying the suspect was accusing him falsely for preventing his mother from giving him food.

Eric Alfred Zieme was arrested in November 2007 in connection with series of robberies in and outside Kumasi. He has since been remanded into police custody assisting police in their investigations but a few months afterwards he nearly absconded but for bullets pumped into his left thigh.

He owns a string of restaurants and washing bays in Kumasi as well as his favourite motorbike, AK47s and pump action guns.