No Freebies For Ministers 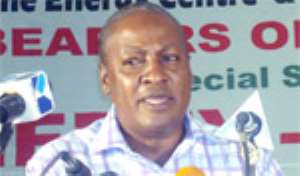 JOHN DRAMANI Mahama, the running mate to Prof. Evans Atta Mills, the National Democratic Congress (NDC) flagbearer, has stated that when the NDC comes to power Ministers of State and all other government functionaries will no longer enjoy free electricity, water, fuel and other freebies while majority of the people wallow in abject poverty.

This, he said, would cause government officials and their families to use such utilities judiciously and not waste them as had been the case.

“Prof. Mills has given me the authority to tell Ghanaians that the government of the NDC will make sure Ministers, government officials will no longer enjoy free fuel, electricity, water.

We will cut down on the presidential motorcade to save cost. But we will pay such people realistic salaries to take care of their own bills and not at the expense of the state,” he insisted.

Mr. Mahama was speaking at the Special Seminar Series for Presidential Candidates dubbed “Flagbearers on Energy”, organised by the School of Engineering of the Kwame Nkrumah University of Science and Technology (KNUST), in Kumasi.

Mr. Mahama held the audience spell-bound as without difficulty he delivered the paper with vivid explanations, demonstrating to the audience that he was not a communicator for nothing.

Outlining his party's energy policy, Mr. Mahama noted that based on the previous initiatives that the NDC had already put in place the party would take steps to intensify efforts to increase generation capacity based on gas-fired power to ensure low generation cost.

He said NDC would aggressively pursue the Tano basin development and expansion of the Osagyefo barge project.

Mr. Mahama expressed worry over the non-involvement of the Ghana National Petroleum Corporation (GNPC) in the West Africa Gas Pipeline Project and gave the assurance that it would be revisited when the party comes to power.

“I want to stress that the West African Gas Pipeline Project was not conceived only as giving access to Nigerian gas. By insisting that it should be an 'open access' pipeline, as the NDC Government did, and was expressed in the original Memorandum of Understanding on the project that was signed by the Governments of Nigeria, Benin, Togo and Ghana, any gas found along the route of the pipeline was to have access to the pipeline upon payment of the transportation tariff.

“Sadly, this aspect of the original understanding has been lost in the subsequent agreements that have been negotiated and signed by the NPP Government,” he stated.

Mr. Mahama indicated that energy projects needed continuity in the implementation of plans for capacity addition.

One of the strong points of his delivery was when he said “perhaps an important lesson for all of us since the First Republic is to avoid the politicization of such development issues and harness all our resources to achieve the best outcomes, especially in times of national emergency”.

“That was why in 2006 we called on the government to adopt a non-partisan approach to energy crisis; this was not heeded, with unfortunate consequences,” Mr. Mahama lamented.

On measures to reduce the cost of producing electricity in Ghana and consequently lower electricity tariffs for consumers, Mr. Mahama stated that the generation of electric power would be fully opened to private and public investors as Independent Power Producers and that investment shall be based on economic and financial criteria considering open access to the network, balance of domestic supply and environment impacts.

He stressed the NDC's commitment to enforcing the ban on the importation of used LPG cylinders.

The function was chaired by Prof. Kwasi Kwarfo Adarkwa while Prof. Seth Asiamah was the moderator.