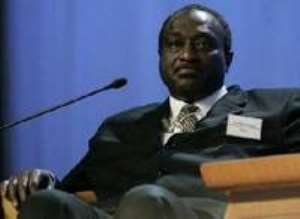 THE bombshell resignation of Alan Kyerematen, defeated presidential aspirant of the New Patriotic Party from the party on Thursday, continues to receive mixed reactions both from the leadership of the party and the public.

There have been accusations and counter-accusations within the rank-and-file of the party following the resignation.

The resignation of Mr Kyerematen, founding member of the NPP and a former Minister of Trade, Industry and President's Special Initiatives, took many people by surprise, having pledged his support for the party's flag-bearer, Nana Addo Dankwa Akufo-Addo, after his defeat at the party's congress last December and later accepting to be part of Nana Addo's campaign team.

In his resignation letter, Mr Kyerematen is said to have cited intimidation and alienation of his supporters after the congress as his reason.

Charles Sam and Kuuku Welsing-Jones, both spokespersons for Mr Kyerematen, said in an interview that all those who openly supported Mr Kyerematen at the congress felt intimidated and, therefore, he decided to resign to save the party's unity.

Mr Sam, for instance, called on the leadership of the party as a matter of urgency, to look into the allegations of intimidation, saying 'we tried to solve this problem in-house. Mr Kyerematen is the person who will not jump to hasty conclusions. His concerns were not addressed.'

He, however, dismissed speculations that Mr Kyerematen will join another party or form his own party. 'At the moment, Mr Kyeremateng has nothing against anybody but I can assure you that he is not going to join or form any political party.'

Mustapha Hamid, an aide to Nana Akufo-Addo, admitted that there were still reported cases of intimidation within the party after the congress but said that even people perceived to be sympathisers of the flag-bearer were also victims.

He cited Ms Christine Churcher, a former minister and known supporter of Nana Akufo-Addo, who he said had to abandon the filing of her parliamentary nomination due to intimidation from people believed to be Mr Kyerematen's supporters in Cape Coast.

'The issue of intimidation is across board, but it is something that needs the collaboration of all in the party to be able to check.' He said after the congress, there have been efforts to integrate all followers of the 17 presidential aspirants to ensure that Nana Akufo-Addo wins the December elections, adding 'we have people who openly campaigned for Mr Kyerematen but who are now working with us to ensure total victory'.

Mr Hamid described the resignation of Mr Kyerematen as 'a huge loss', and said the party will work hard to get him back to its fold.

Nana Ohene Ntow, General-Secretary of the NPP, said the leadership of the party is in firm control of the situation, even though Mr Kyerematen's resignation came as a shock to the party.

He, however, declined to comment on efforts being made to persuade Mr Kyerematen to rescind his decision.

Mr Hackman Owusu-Agyemang, a former minister and one of the presidential aspirants whom Mr Welsing-Jones accused of intimidating some perceived Kyerematen supporters in Koforidua, dismissed the allegations saying 'the party cannot be built on lies and untruths'.

Although politics is about numbers, Mr Kyerematen's resignation will not affect the party's chances of retaining power in the December polls. A true and genuine Danquah-Busia (loyalist) will never resign from the tradition,' he affirmed.

Besides, he said, the constitution of the NPP is supreme and above every individual member's interest.

'The resignation will not affect the unity of the party because the NPP has the track record to manage internal crisis,' he added.

While some NPP supporters were critical of the party's executive for allowing the issue of intimidation to persist after the congress, others blamed Mr Kyerematen for what is happening.

Joseph Kyei Arhin, a shoe-seller at Kwame Nkrumah Circle, said: 'The party executives have allowed this problem to fall flat in their face and we all look upon them to address it.'

But Abigail Tsotsoo Lamptey accused Mr Kyerematen of abandoning the party 'at a time when we need him most,' adding 'he is trying to tell us that he does not care about what happens to the NPP after 2008.'

From Tema, G. Blay Gibbah reports that a cross section of politicians there, too have reacted to the news of Kyerematen's resignation with mixed feelings.

that a cross section of politicians there, too have reacted to the news of Kyerematen's resignation with mixed feelings. Mr Obeng Fosu, chairman of the Tema East Constituency of the NPP said they received the news with a lot of surprise because they had no prior knowledge of any attack on supporters of Mr Kyerematen by the supporters of Nana Akufo-Addo.

He therefore called on the leadership of the party to investigate the matter and resolve whatever differences there may be.

He viewed the reasons being assigned by a section of the media for Mr Kyerematen's action as matters that can be resolved.

He therefore urged the hierarchy of the party to put their shoulders to the wheel and resolve any differences.

From Tamale Yakubu Abdul-Majeed reports that Mr Faisal Gbunzali, Northern Regional Deputy Secretary of the NPP described the news of Mr Kyerematen's resignation as a big shock to the party.

reports that Mr Faisal Gbunzali, Northern Regional Deputy Secretary of the NPP described the news of Mr Kyerematen's resignation as a big shock to the party. 'In fact this is shocking. I am still trying to come to terms with Mr Kyerematen's resignation,' he stated and urged the national executive to as a matter of urgency, find ways to woo him back into the fold of the party as soon as possible.

A sympathiser of the NPP at the Tamale Market, Musa Nindow, described Mr Hackman Owusu Agyeman's comments on the resignation on radio as having the potential to generate more confusion for the party as the December election approaches.

Nindow said, 'Electoral victory for any political party is about numbers and when big shots like Alan decide to leave, efforts should be made to retain them rather than comments from key people such as Hackman which may muddy the waters.'

A.A. Mbord, also reports from Bolgatganga that some NPP heavy weights in the Upper East Region have expressed grave concern over the resignation of Mr Kyerematen, saying it will seriously jeopardise the fortunes of the party in the December elections.

that some NPP heavy weights in the Upper East Region have expressed grave concern over the resignation of Mr Kyerematen, saying it will seriously jeopardise the fortunes of the party in the December elections. They said Mr Kyerematen brought into the party a new dynamism which attracted large following for the party across the country.

From Takoradi, Godfred K. Nyanney, reports that a cross-section of people in the Sekondi-Takoradi metropolis interviewed by Times over the resignation of Mr Kyerematen described his action as a 'disaster' for the NPP.

reportsthat a cross-section of people in the Sekondi-Takoradi metropolis interviewed by over the resignation of Mr Kyerematen described his action as a 'disaster' for the NPP. They said Mr Kyerematen is a respectable man who has large following in the NPP and 'since even one vote is very important in any election,' his resignation should not be taken for granted by the NPP flag-bearer and party executives.

David Yarboi-Tetteh, reports from Cape Coast that party members the Times spoke to, expressed shock at the resignation of Mr Kyerematen and urged him to re-consider his decision in the interest of the party.

from Cape Coast that party members the poke to, expressed shock at the resignation of Mr Kyerematen and urged him to re-consider his decision in the interest of the party. The Regional Secretary of the NPP, Kwamena Duncan, said Mr Kyerematen's decision was regrettable as it comes just some few months to the elections in December.

He, however, said that the party's foundation was solid and it would not be shaken by 'this unfortunate event.'

The secretary of the group, Kwabena Amankwah, called for dialogue among all interested parties to bridge the gap in the best interest of the party.

'The resignation of Mr Kyerematen is unfortunate, shocking and disturbing,' he added.

A source close to the party's flag-bearer who is in Cape Coast on a campaign tour refused to comment on the issue, saying that Nana Akufo-Addo would comment after seeing a copy of the resignation letter.

From Matthew Ayoo, Wa reports that the Regional party chairman Alhaji Abdul-Rahaman Abubakari, said the resignation of Mr Kyerematen was a surprise.

that the Regional party chairman Alhaji Abdul-Rahaman Abubakari, said the resignation of Mr Kyerematen was a surprise. Alhaji Abubakari said at this crucial state of an election year, the NPP would not like to lose any of its members more so a leading member of the party.

'We want to have everybody on board and working towards a resounding victory for the party in the December 7 general election,' he said.

A party loyalist, Issah Alidu described Mr Kyerematen's resignation as a 'disgraceful act' which would not in anyway affect the fortunes of the NPP in the December 7 general election.

He said Mr Kyerematen's decision to leave the party at this point in time was a clear manifestation that he did not have the interest of the party at heart.

The Brong-Ahafo regional office of the NPP in Sunyani declined to comment on the issue, writes Ian Motey.

Five executive members, including the regional organiser, Kofi Darko, contacted by the Times, said since the issue was being handled by the national hierarchy of the party, there was the need for everyone to exercise restraint.

However, a cross-section of the NPP supporters interviewed expressed dismay about the resignation and appealed to President Kufuor to intervene immediately.

E-levy not reduced to 1%, no agreement reached with Minority...
13 minutes ago