How We Were Raped • Altar Boy Tells Pope 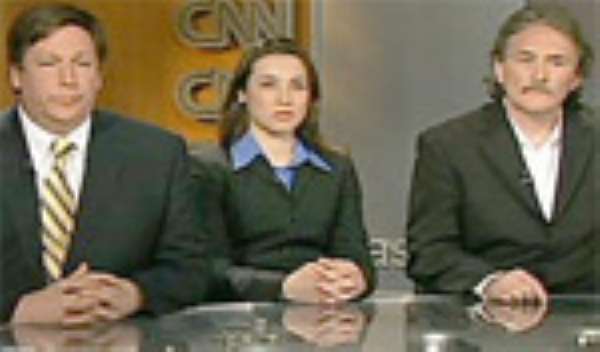 Bernie McDaid was an 11-year-old altar boy when his priest began molesting him, one of some 50 boys who have said they were molested by the same man.

Like so many victims of abuse, McDaid's young life spiraled. He turned to drugs and alcohol in his teen years, struggling to cope with what "Father B" had done to him.

On Thursday, he finally got a chance to do something he'd hoped for decades: He met with the Holy Father and told him about the abuse he had suffered.

"I basically told him that I was an altar boy ... a young boy praying to God at the time that I was abused," McDaid told CNN. "It wasn't just sexual abuse, it was spiritual abuse, and I want you to know that."

"And then I told him that he has a cancer growing in his ministry, and needs to do something about it. And I hope he hears me right, and I touched his heart. And he nodded."

McDaid was part of a small group of victims of the sexual abuse scandal that rocked the Roman Catholic Church who met with Pope Benedict XVI on Thursday.

They shared their stories with the pope in a Washington chapel in what the victims called an emotional, frank and ultimately hope-filled meeting.

Faith Johnston clutched her mother's rosary beads as she tried to speak to the pope. But her emotions took over.

"I didn't end up saying anything. I got up to him, and I burst into tears," said Johnston, who at 14 was molested by her priest. "I think just my tears alone spoke -- just spoke so much."

She added, "I hope that other survivors can hear about this, see this and get the same hope that we've gotten from it."
Olan Horne said the pope first apologized to them in what he called an "unscripted" and "free-flowing" meeting.

"We were all able to answer all of the questions that needed to be asked and for him to respond to. And he did -- and he did forthright," Horne said.

"He seemed to intrinsically understand what we were talking about. And he spoke to those issues to each one of us in a spiritual way, in a pastoral way. And he also was very respectful of where and what we wanted to talk about."

Horne added, "My hope was restored today from what I heard. And I believe we received a promise."

Horne and McDaid both accused the same priest, the Rev. Joseph Birmingham, of molesting them. Birmingham died in 1989.

The Rev. Federico Lombardi, a papal spokesman, said the pope listened to everyone's "personal accounts and offered them words of encouragement and hope."

The surprise meeting came during the pope's visit, the first trip to the United States by the Holy Father since the abuse scandal rocked the church in the early 2000s.

The meeting is believed to be the first between a pope and the victims of clergy sexual abuse.

The Survivors Network of those Abused by Priests, or SNAP, the nation's oldest and largest support group for clergy abuse victims, said it was pleased the pope met with the victims, but hopes the church will do more.

"This is a small, long overdue step forward on a very long road. We're confident the meeting was meaningful for the participants and we're grateful that these victims have had the courage to come forward and speak up," SNAP said.

Earlier Thursday, celebrating Mass under blue skies in center field at Washington's new ballpark, the pope gave a 20-minute homily that focused on hope, repentance, unity and reconciliation among the 70 million Catholics in the United States.

"It is in the context of this hope, born of God's love and fidelity, that I acknowledge the pain which the church in America has experienced as the result of sexual abuse of minors," Benedict said.

"No words of mine could describe the pain and harm inflicted by such abuse. It is important that those who have suffered be given loving pastoral attention."

McDaid was sitting in the audience with his mother when he heard those words.

"I had tears in my eyes that I wasn't ready to have. It was an incredible moment for me," he said.

"We're at the beginning of a new start, and there's real hope this time. It's not just words. I think there's going to be action following this moment now."