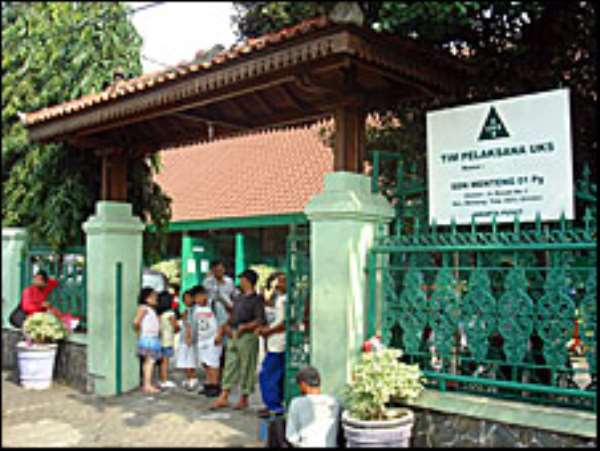 Primary School 1 in Jakarta's Menteng district is an unlikely place to look for an American presidential hopeful.

Hidden down a narrow street in the Indonesian capital, overlooked by the big houses of the city's elite, it is easily missed, except for the bubbling noise of schoolchildren drifting over the fence.

But this is where Barack Obama - the man aiming to be America's Democratic nominee for president - spent some of his childhood.

He's made much of his varied upbringing during the course of his campaign, and the qualities and vision it gave him.

A new book about his time here has just been launched by an Indonesian publisher - and there's also a lot of interest in what he might do for US-Indonesia relations should he reach the White House.

In the playground of his old school, I met up with two of his classmates - Mary and Rina. Was there anything special about him, I asked?

"No," said Mary. "He wasn't a special boy, just an ordinary one. But maybe that's the special thing; he had a capability to blend with any kind of situation."

One thing marked him out as different though, said Rina - his ambition, noted in the school memoir book.

Well, a lot has changed since those days. Barry, as he was known then, is now campaigning to be the Democratic nominee for exactly that job. And his progress is talked about a lot in Indonesia - on campus, on television, and of course on the internet.

Already he has around 700 members, and a lively message board. He told me Mr Obama's appeal wasn't based on his policies - in his opinion there's little difference on that score between the three main presidential hopefuls.

But, he said, people are looking for a certain kind of character: "Someone we can trust; someone that can inspire people; that can symbolise all the things currently happening in the world."

The US embassy here has also been tapping into this new-found interest in their elections.

In February, when the US primary race reached a crescendo on Super Tuesday, Ambassador Cameron Hume invited Indonesian students and politicians to his house to watch the results come in.

He hasn't been surprised at the level of interest in Mr Obama, given that his primary school is around the corner.

The identification is running pretty strong, judging by a mock-vote, held at the Super Tuesday event. According to Ambassador Hume, it gave Mr Obama a win that "his campaign team probably would have been satisfied with".

So is there anyone here who's rooting for the other candidates? Well yes, of course there is, Julia Ismaya for one, an employee of an international NGO.

She likens "Obama syndrome" to a kind of MTV culture, where television picks on a particular theme, and the audience internalises it.

It may be more about identity politics than actual policy, but most Indonesians do believe a change in the White House could bring a big change in the US's attitude to their country.

After years of a foreign policy that many Indonesians viewed as anti-Muslim, who better to have in the most powerful job in the world, they say, than someone who's lived among Muslims, and seen their world from the inside.