The CPP is Full of Empty, Textbook Rhetoric 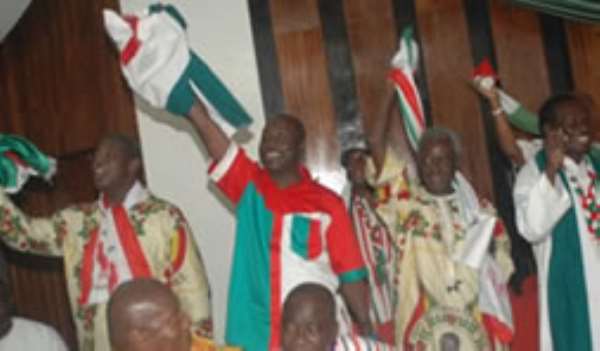 A recent rump-CPP position article published on Ghanaweb.com (4/17/08) had Ghana's most neocolonialist political party warning both the Kufuor government and the African Union against unwittingly permitting the unscrupulous use of the continent and its enormous resources for the industrial development of such middle-level economies as China and India.

In the main, the article, titled “CPP Warns Against a New Scramble for Africa,” merely rehashed tired, clichéd and vacuous anti-colonialist rhetoric. For instance, in vehemently decrying the recent India-Africa Summit, otherwise known as the Delhi Declaration, the writer, a Mr. Kosi Dedey, lamented the fact that the Delhi government had earmarked a credit facility of $5.4 billion to African nations for the importation of “a range of industrial products from India, including tractors, water pumps, transportation equipment [whatever the latter means], and communication gear,” without also responsibly observing that this, admittedly, lopsided state of global economic intercourse has been made possible largely because of the snail-pace attitude of African governments, as a whole, towards the rapid modernization and development of the continent, in the case of Ghana, beginning with the Nkrumah regime.

For instance, under the checkered tenure of the original CPP, Ghana advanced fatuously liberal credit facilities to such Eastern-European nations as the erstwhile Czechoslovakia, a country far in advance of Ghana, then and even now, on the economic development front, for the delivery of basic technological equipment which was both found to be woefully unsuitable for our tropical climate as well as being invariably tardily delivered (out of season) as to severely challenge its maximum utility (see Kwame Arhin's The Life and Work of Kwame Nkrumah).

In sum, the members of the rump-CPP are the last crop of Ghanaian politicians and/or ideologues to reserve either the right or privilege to pontifically lecture the rest of us on the imperative need to shield our country and its resources from unconscionable exploitation by such progressive economies as India and China.

In reality, what the CPP ought to be frontally addressing, in this proverbially silly-season of electioneering campaign regards the woeful inability of its patriarch, “Osagyefo” Mr. Kwame Nkrumah, in effectively catalyzing the industrial development of the country. And for the operatives and scions of a government that massively and secretly traded with the Apartheid South African regime to be pontificating about Pan-Africanist Progressivism constitutes the very height of political absurdity.

Indeed, it cannot be gainsaid that African nations ought to be trading far above and beyond the current 8.4-percent GDP across the board, and among themselves, as opposed to their staggering 50.6-percent volume of trade with the rest of the world. Still, the relevant question to ask is just in what merchandise are these African nations expected by the rump-CPP to trade at a level that rivals, or even bests the continent's trade with the global community (largely the West), when, more or less, virtually every African country, with the glaring exception of South Africa, is a neocolonialist raw-material producing economy?

To be certain, it was precisely the relative economic diversity and remarkable industrial development of Apartheid South Africa that prompted Nkrumah's CPP regime to massively trade with the erstwhile racist regime, even while also criminally and hypocritically pretending to be staunchly in support of United Nations-imposed economic sanctions against the same Apartheid regime.

In other words, the kind of predictably facile scapegoating of India and China being indulged by the CPP begs the proverbial question. And the latter regards the imperative need for African governments to lay out a comprehensive blueprint for the rapid and massive economic development of the primeval continent. And so far, short of simian neo-Nkrumaist platitudes, the rump-CPP has yet to articulate any creative, credible and feasible agenda on the economic development front.

And here also must be recalled the 1919 attempt by the Indian residents of present-day Republic of Tanzania – then Tanganyika – to take over that East-African nation, in the wake of Germany's crushing defeat in World War I, with the clearly criminal and imperialist objective of running Tanzania as India's colonial outpost. The latter objective had been unmistakably informed by European racist political culture which envisaged Indian immigrants of Tanzania as a relatively superior species of humanity vis-à-vis the proverbial African personality. It would only take the “timely' intervention of British imperialism to call the Indians to order, thereby putting them in their place, as it were.

What the preceding means is that contrary to the ideological pretense of the CPP “Verandah Boys” to vanguard anti-colonialist acumen, the Danquah-Busia students have always been at the forefront of pragmatic and unfettered development agenda for the African continent. We have only been admirably short on the kind of self-righteous rhetoric which the CPP “Verandah Boys” appear to routinely confuse with realpolitik.

For that matter, we pray that in presumptuously calling on the African Union to “ensure that…industrial goods from India are of the highest quality,” the rump-CPP also recognizes the right of New Delhi to demand the same quality of products from its African trading partners. Ironically, the CPP apparatchiks appropriate the same neocolonialist rhetoric and thinking that they would have their audience believe to be peculiar to India and/or China, thus the following rather cavalier statement: “Specifically, the AU must ensure that industrial goods from India are of the highest quality and can complement Africa's own efforts at industrialization and development.”

*Kwame Okoampa-Ahoofe, Jr., Ph.D., is Associate Professor of English, Journalism and Creative Writing. He is the author of 15 books, including “Abena Anin'waa: Letters to My Daughter” (Atumpan Publications/lulu.com, 2008), his 12th and most recent volume of poetry. E-mail: [email protected]