Excuse Me, Mr. President. What Are You Doing About This Threat ? 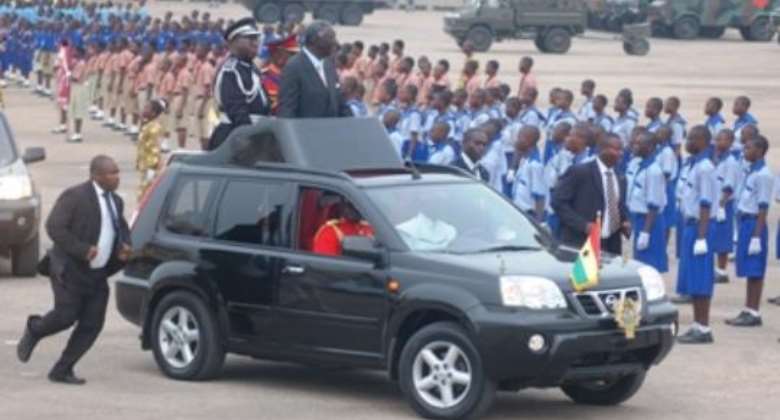 It takes courage and determination to fight corruption and often those doing so put themselves at a great personal risk. However, we in Ghana need to wage a battle against corruption if our people are to see a modicum of development in our lifetime, and if our democracy is to survive. The biggest threat to our democracy is to allow the all pervasive corruption now prevalent to fester and consume our fourth try at democratic governance.

Corruption saps the lifeblood of a society. It deepens inequality with the poorest and the most vulnerable bearing the brunt of it. It is the poor unable to pay bribes who have to forgo the basic goods and services that should be free or at least affordable. In most cases the clean water, the education, the basic health care to which they are entitled never reach them. Funds have been diverted or misapplied.

I still don't see the wisdom in blowing $35 million on partying by [email protected] without proper accountability for the entire nation to be plunged into total darkness only days after. Can anyone justify the importation of over 200 luxury cars after collecting 10% commission just to turn around and auction them after a couple of months? And you can bet who are going to be the beneficiaries when they are auctioned out. It is ruling party officials, government officials, their friends and relatives, who will take home these cars at ridiculous prices. If we didn't really need them why didn't we rent them instead of buying? Is the government now engaged in buying and selling of luxury cars business?

Corruption ultimately kills. This diversion of funds, misapplication of funds, and the reckless misuse of the tax payers money prevents us from making progress in meeting the basic needs of our people. It prevents us from improving the road network to our rural areas where farming which is the backbone of our economy is practiced. It prevents us from building schools, putting up hospitals, buying medicine for our health centers and hospitals, and also it prevents us from paying living wages to our workers to motivate them to stay in Ghana and help rebuild the economy. The politicians and bureaucrats who steal in suits and with memos and pens are no less a threat to our security as the armed robbers who rob in masks and with guns and cutlasses. Both are serious threats to our existence and they need to be tackled with all seriousness.

The World Bank declares "corruption is among the greatest obstacles to economic and social development. Corruption not only undermines the ability of governments to function properly, but it also stifles the growth of the private sector." Can we make corruption history? It is a tough and daunting task but that doesn't mean we should give up. What is seen as a corrupt practice by one person is seen as quite normal and acceptable by the other. One person's nepotism is another's family duty and one person's bribe is another's gift.

Corruption is not simply bending of rules to supplement low salaries, or to assist a friend or relative in need. If allowed to persist it grows like a cancer entrenching a venal bureaucracy that believes that reward comes not from work and effort but from putting up an implacable wall of obstruction to public service, whose doors they will open only with payment of bribes. In due time every government service, what is routine in the West and can even be accomplished by mail, has to be paid for in bribes. If in your idealism, you decide to go the proper route - fill out application forms and wait-you are only fooling yourself. At the other end, entrenched corruption creates a belief in the rich class that they own the bureaucracy, perhaps even the government. Anything can be bought, rules and laws are there to hold the others down. For those without the means or influence, government is the enemy, in a life that's an uphill battle--- untill their time comes, and they have the means to pay, or the position from which to exhort. An all pervasive corruption becomes a way of life and a discomfort to be endured then

Unless we tackle governance and accountability we are not addressing the real issues, we are not tackling the bread and butter issues.To tackle corruption adequately, I recommend the setting up of a government accountability project, a private watch dog group to ensure accountability on the part of the government. The current accountability office in the presidency is a mere window dressing designed to hide and protect corrupt officials and their deeds. The Serious Fraud Office and CHRAJ, however well intentioned they may be, have been rendered powerless and useless entities.

That is why a private watch dog group is preferred. The current maintenance of law and order and prevention of corruption is systematically flawed. There is also a need to install Inspector Generals in every ministry reporting to a Public Integrity Commissioner (PIC) a post created by Parliament and thus responsible only to the Legislature but not the Presidency, who will have the power to refer corrupt officials for prosecution. The installation of Inspector Generals, and the creation of a Public Integrity Commissioner are important steps to fight corruption and cronyism which in turn will help strengthen democratic institutions.

Good governance has been suggested as a way of eliminating corruption else we will wake up one early morning to hear the voice of an adventurer on the airwaves claiming to have stepped in to salvage the situation and bring prosperity and freedom to all. We can all do well to champion the cause of accountability and transparency. We need strong social infrastructure, respected institutions and functioning systems of accountability and transparency. Anti corruption conventions are useless without prosecutions so naming and shaming wrongdoers and prosecuting them will serve as a powerful deterrent. Remember, governments that turn a bind eye to corruption are complicit in corruption

Ben Ofosu-Appiah.
Tokyo-Japan.
The writer is a political and social analyst and public policy expert based in Tokyo, Japan.He has written extensively on policy issues in Africa and the Third World. He welcomes your views on this issue.