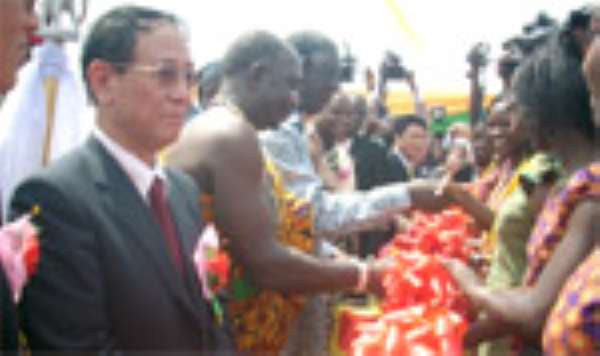 GOVERNMENT'S avowed intention of providing energy security through public-private partnership ventures is gradually becoming a reality as individuals and organisations have expressed interest in the area, in response to President J.A. Kufuor's incessant calls.


It was therefore not surprising that both the President and his Vice, Alhaji Aliu Mahama, together with several dignitaries, attended the sod-cutting ceremony of the Sunon Asogli Kpone Power Plant project at Kpone, near Tema.

The President, who was originally scheduled for another assignment at that particular moment, said the importance the government attached to the project compelled him to be present at the ceremony.

Mr. Kufuor, who recalled the nine-month darkness the nation was thrown into following last year's energy crisis, said: “Government has been interested in the project right from the moment it was conceived to fruition.”

The President, who was visibly happy with Togbe Afede's achievement, invited more individuals to invest in the energy sector, to help address the nation's ever-increasing energy demand.

The 560 megawatts thermal project, which was conceived two years ago is in two phases, with the first one expected to be completed by the end of this year.

The second phase of 360 megawatts would also be developed soon and is expected to be put into commercial operation in 2009.

The President was impressed with the speed at which the project, expected to generate about 1,000 direct jobs for Ghanaians was being executed and hoped the Ghanaians who would be employed would do their best to learn the technology of the Chinese, rather than focusing so much attention on the money to be earned.

“I believe the know-how is even more important than the money. Ghanaians should learn the know-how. We must learn the work ethic of the Chinese.”

He however did not mince words when he told the Chinese management of the project to work in accordance with the country's labour laws, and to the Ghanaian employees, he asked them to exhibit good conduct.

He commended Togbe Afede, describing his initiative as a good example of public-private partnership for accelerated development.

Togbe Afede, who could not hide his elation for his dream's realization, excitedly sang Jim Reeves' popular melody “We Thank Thee” like a professional musician, to the amazement and amusement of the gathering, which clapped for several seconds.

He recalled the history of the project, which he poetically said was being constructed on the “Gao Lagoon by Chairman Gao.” That name coincidence between the lagoon and the construction company's chairman, he said, was the work of destiny.

The Asogli Overlord commended the Chinese firm for starting the work in just three months after undertaking feasibility studies.

The Sunon Asogli power, the first overseas project of the Shanzhen Energy Group (SEG), was jointly established in Ghana in 2007 by SEG and the China-Africa Development Fund.

Meanwhile, Vice President Mahama has applauded the Chinese government for its support for the Sunon Asogli Power Project.

Previously, he recalled, Ghana had international economic relations based on a one–way traffic, consequently, the project signifies a new partnership between Ghana and her international development friends.

“Where previously we have had doubts we believe now we are going to enjoy a real partnership of equals with our Chinese friends,” he said at a dinner hosted by the Shenzhen Energy Group.

Quoting the adage 'one gets to know one's friends in times of great difficulty or distress', Alhaji Mahama said China had shown true friendship and had come to the aid of Ghana when her domestic, industrial and commercial life was virtually brought to a standstill.