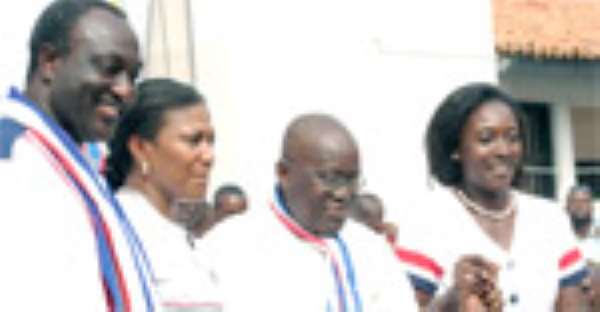 THE sudden resignation of former New Patriotic Party (NPP) presidential aspirant and one-time Trade and Industry Minister, Alan Kwadwo Kyerematen, has not only sent shockwaves across the entire political landscape, but also generated heated debates among the hierarchy of the ruling party.

While some party faithful conceded that they were shocked to the marrow by Kyerematen's resignation, others thought that he had shot himself in the foot, destroying his political career in the process.

Ever since news of the 52-year-old economist and lawyer's resignation broke on Thursday evening, the issue had dominated virtually every political discussion in the country.

Alan submitted his resignation letter to the National Chairman, Peter Mac Manu, who was at the airport on his way to Australia, saying that his supporters were being harassed and victimized ever since the congress that elected Nana Addo Dankwa Akufo-Addo ended at the University of Ghana, Legon in December.

In the letter copied to the President, the flagbearer, and the General Secretary of NPP, Alan Kyerematen, popularly called Alan Cash indicated that he might return to the party at an appropriate time, further raising eyebrows.

The astute politician had since not explained in detail the real reasons why he opted to leave.

Observers said it was the first time in the country's political history that a presidential aspirant in a ruling party had resigned from the very party he badly wanted to lead a few months ago.

In the midst of the debates, accusations and counter-accusations also kept flying about, within the top rungs of the party.

For instance, Kuuku Welson-Jones, who described himself as spokesman for Alan, during a radio interview, accused Hackman Owusu-Agyemang, former Minister of Water Resources, Works and Housing of intimidating and harassing Kyerematen's supporters in the party.

Another spokesperson, John Kumah alleged that he and several other people had received threatening text messages, saying the National Chairman, Peter Mac Manu had been notified but failed to act.

Asked if Alan Cash would join another party or go solo in politics, he said: “In politics, you never say never. He may go into politics”.

Many of the insiders who commented on the development, however opined that no matter the case, resigning should not be an option for Alan. They further noted that Alan's resignation would have little or no effect on the party's performance in the upcoming general elections.

He was quick to add that shocking as it might sound, it would not affect the fortunes of the party in the December presidential and parliamentary elections.

Giving the assurance that the national executive was in full control of the situation, Ntow hinted that the party would enter into some form of discussions with him to see if he would rescind the decision.

Dr. Arthur Kobina Kennedy, Communications Director of Nana Akufo-Addo's campaign team, who also spoke on the same station, said Alan's resignation should not be a basis for a split.

He said Nana Akufo-Addo had launched a campaign team which identified Mr Kyerematen as a key personality in the winning bid, adding that the issue could have been resolved amicably.

Responding to Kuuku's accusations, Hon Owusu-Agyemang, MP for New Juaben North and a failed presidential aspirant, said he refuses to be used as a scapegoat.

He noted that the party, which was formed long ago 'before many people joined', was bigger than any single person, warning that “the party cannot be built on lies and untruths”.

He stressed that genuine Danquah-Busia people would never resign from the party because of alleged harassment, saying that Kyerematen's resignation would not affect the party in anyway, even though he wished that the former Trade Minister changed his mind.

He cited the resignations of the late Alhaji Inusah Issaka and Dr. Wereko-Brobby in the past which did not affect the party in anyway.

“Some people think they are tin gods, and therefore, they want special treatment,” he said.

Some of the 15 aspirants, who lost at the December 2007 NPP congress alongside Mr. Kyerematen, also expressed their dismay at the news but were of the view that it would have zero effect on the party.

Daniel Kwaku Botwe said the party would survive the shock and recalled that others had ventured similar actions before.

“That is not to say that he can go. I mean if he comes back, fine, but Nana will win,” he said.

Kwabena Agyepong was of the view that politicians must be prepared to sacrifice a little bit more for their party.

“As for me, I am a bit disappointed at his decision. We as a party will continue to fight forward till victory is attained”.

On his part, the Ashanti Regional Chairman of the Council of Elders, Akenten Appiah-Menka said he would only speak if President John Agyekum Kufuor expressed his opinion on the issue.

Mr. Kyerematen contested the flagbearership of the NPP with 15 others and came out as the runner-up.

Even though the constitution of the party demanded a run-off as none of the candidates could poll the required 50 plus one vote, Alan conceded victory to Nana, saying it was in the interest of the party.

He pledged his support for Nana Akufo-Addo, MP for Abuakwa South Constituency.

Meanwhile the national executive of NPP, in the absence of the Chairman, Peter Mac Manu, yesterday held a closed-door marathon meeting to deliberate on the political Tsunami that had hit the party.