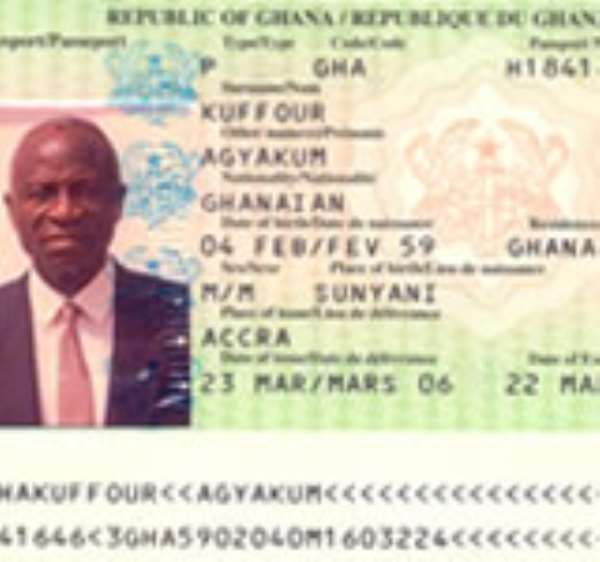 
About 4,000 passports are piled up at the Kumasi office of the Ghana Immigration Service because applicants have refused to collect them.

Some have been there for nine years, since 1999. Most of them have been dumped in the garage of the Regional Commander, Emmanuel Lamptey, for lack of space at the office.

Disclosing this in an interview with the Times here. Mr Lamptey could not explain why owners of the passports had not collected them. He also did not disclose the period of the processing of the applications.

He, however, suspected that some applicants after submitting application forms fell on "goro boys" who acted as middlemen to process new applications for them.

When that happens he said, the owners refuse to come back to collect the first.

He said his office is unable to detect the double applications because it lacks the machine for that purpose.

Besides that the Commander said, some people too decline to col1ect their passports when they misplace their col1ection slips, which is a proof of receipt of the application after payment had been made.

He, therefore, urged those who have applied for passports and had misplaced their col1ection slips to contact his office.

Mr Lamptey explained that the processing of passport application forms and subsequent submission of such applications to the national head-quarters was quite elaborate and appealed to the public to exercise restraint whenever they submit applications.

He said applications go through processes such as vetting payment, registration, recommendation and eventually typing before forwarding to the headquarters for onward transmission to the passport office for issuing.

Mr Lamptey explained that several problems cropped up during the vetting stage like improper filling of the application forms, fake birth certificate, contribute to delays, stressing that tmder normal circumstances, issuance of passports should take just a month.

He stressed that medical doctors, journalists, drivers or teachers, should attach certificates to their application forms, for verification as some people forget their professions.

But, he said, hairdressers, tailors, fitters, carpenters and the like would not be required to attach any certificate.

The Commander reiterated the call on the public not to deal with middlemen or even officers of the service who are not scheduled to handle passports, stressing that the cost of passport remains at GH¢lO (¢l00,OOO).

According to him, "Whosoever gives more than the amount is attempting to corrupt the officer-in-charge and warned that the giver is equally guilty as the receiver."

As a way of drawing public attention to the piled up passports, Mr Lamptey said the office was making efforts to publish the names in the daily newspapers.