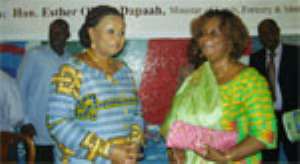 Mining companies operating in Ghana will soon be mandated to pay more than 3 percent royalties to government.

CITY & BUINESS GUIDE source indicates that the Minerals Commission has put together the necessary regulatory framework to ensure that the mining companies contribute more to government coffers.

The regulatory framework, according to the source, will ensure that there is an exact percentage that all mining companies will be mandated to pay to government as royalties.

Obviously, the bill will affect producers that include Newmont, AngloGold, Gold Fields and Golden Star Resources-the leading gold mining companies in the world which have concessions in the country.

The move makes Ghana the latest in the growing list of African countries that are pushing to benefit more from commodities' long rally as gold reached a record $908 per ounce at the beginning of the year.

Section 25 of the Minerals Act stipulates a mining royalty of not more than 6 percent or less than 3 percent of the total revenue obtained from mining operations.

But mining companies operating in Ghana, whether big or small, have only been paying 3 percent-the lowest rate to the government.

The bill will look into how communities hosting mining companies can benefit from the royalties paid to the central government, thus Ghanaians will be assured that mining companies would cough up more in mining royalties.

The United Nations Conference on Trade and Development (UNCTAD) has claimed that Ghana earns just some 5 percent of the value of its gold exports, a lower figure than in many non- African gold producing countries.

In June last year, Ghana's Chamber of Mines proposed a 10 percent royalty for miners, whom it accused of not doing enough for the communities they operate in, voicing concern that the current royalties paid are paltry and would not translate into meaningful development in the communities.

Newmont and Golden Star were reported to have spent $4 million and $3.6 million, respectively, on social corporate investments.

Only recently, on April 1, Zambia, located in Southern Africa began enforcing a new tax code from which it expects to earn $650 million in additional revenue this year.

The new tax code lifts royalties on sales fivefold from 0.6 percent to 3 percent and increases corporate income tax to 30 percent from 25 percent.

Tanzania has also proposed new legislation that would see mining firms paying the existing corporate tax of 30 percent and a royalty of 3 percent for gold and 5 percent for diamonds depending on the life of the mines.

Under the old mining policy, companies could defer tax for up to 20 years.

Minority investigates impersonation of Adwoa Safo in 2022 bu...
50 minutes ago