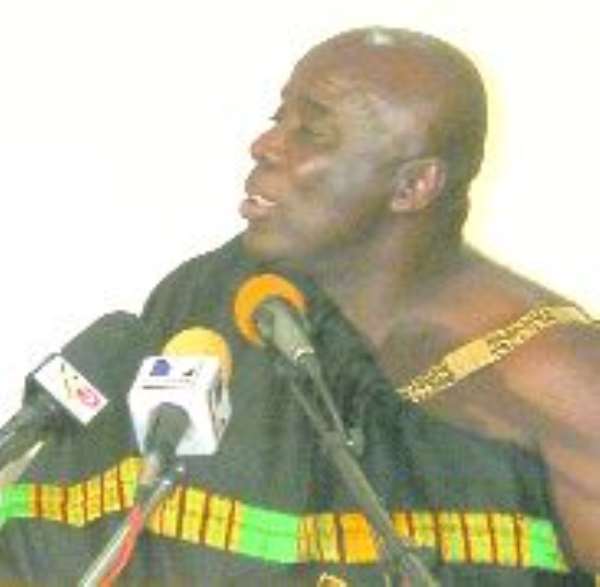 The Okyenhene, Osagyefuo Amoatia Ofori Panin, has called on the government to restore the collection and disbursement of stool land revenue to traditional rulers to make them financially autonomous.

He said local governance was best placed to determine local needs if it worked closely with traditional systems of governance and noted that chiefs could not be worthy partners in development if the revenue from their stool lands was taken away and controlled by the central government.


The Okyenhene was delivering a lecture on the theme, “Chieftaincy, Peace, Security and National Development”, to officer cadets at the Ghana Police College in Accra yesterday.


He said there were over 48,000 settlements in Ghana and that the central government was active in only 12,000 of them.


That, he said, implied that 75 per cent of the people were being governed on a day-to-day basis by chiefs, adding that “if this country has survived the test of time for peace and stability, the gong-gong has played a major role in maintaining peace and security in the country”.


He said there was no doubt that the chieftaincy institution played several roles in the lives of the people and that the history of all the groups that constituted Ghana was full of the heroic deeds of many men and women in the distant past who made sure that their people had peace and security.


He further said the chieftaincy institution handed over an organised system of law and order that ensured peace and security and that in the past chiefs were able to enforce laws better than central governments did in the post-independence era.


Osagyefo Ofori Panin said in the past a law banning people from polluting the source of a community's drinking water was obeyed to the letter and nobody could enter a sacred grove to harvest timber.


He said deriving their mandate from purely customary roots, traditional rulers wielded a lot of authority and the institution had proved to be the most enduring of all national institutions since pre-independence times.


The Okyenhene said, however, that as a human and dynamic institution, it was imperative that chieftaincy was changed and adapted in order to make the institution more relevant to the demands of our time, adding, “We should not be afraid to change that which has outlived its usefulness and relevance.”


He said there was a clarion call for chiefs to shed the image of being the mere custodians of culture and tradition and offer practical leadership that could help transform the lives of their people.


“My answer to that call is that we have magnificent dreams but we cannot put them into action because the central government holds and controls all revenue,” he said.


Osagyefo Ofori Panin urged the government to re-examine Article 276 of the 1992 Constitution, which prohibited chiefs from participating in active political activity, especially in view of calls for the establishment of an upper chamber of the national legislature.


He said the country's political and economic stability, as well as the peaceful atmosphere prevailing, was not a product of only the good performance of the central and local government structures but also the successful and continuing efforts of governments and traditional authorities.


The Commandant of the college, Osabarima Oware Asare Pinkro III, said the essence of the theme was to inform the public, especially the cadet officers, that chiefs were essential elements for public security stabilisation and tools for peace and security.


He said the services of the traditional rulers could not be dispensed with when their areas of jurisdiction boiled up with acts of lawlessness that could potentially retard development.