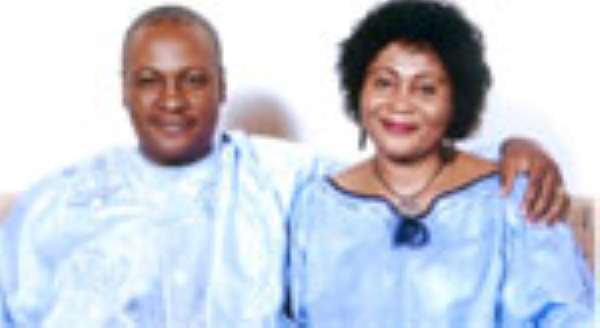 THE LADY who keeps John Mahama's bed affectionately warm at night has made some intriguing revelations about her marriage with the vice-presidential candidate of the National Democratic Congress (NDC).

Mrs. Lordina Mahama, the 45-year-old light-skinned wife of the Member of Parliament for Bole/Bamboi, has told DAILY GUIDE that she is not in the least perturbed that her husband is perceived as a 'woman's man' because she is well-adjusted to that 'hazardous' life of being married to a handsome man.

“That is the hazard of being married to a handsome man; even my friends tease me and say that I am lucky to have caught him (John Mahama) when I did, else if they had met him first, I would not have had him,” Mrs. Mahama revealed.

She is currently pursuing a degree programme at GIMPA, where she is in the final year of studies in the Bachelor (Hospitality Industry) programme.

Lordina Mahama, speaking in a pensive mood, confirmed reports that her husband has other children apart from hers, and explained how it happened.

“John was a bit wild in his more youthful days. It happened at a time we had some turbulence in our relationship and I had returned to Europe where I lived many years before we got married.

“But we have managed to build a stable relationship. He joined me in worshipping at the Assemblies of God Church about seven years ago and it has imbued in him a sense of confidence and made him a loving and responsible father.

He is at peace with himself and God and if I were young and had to marry, I would marry him all over again,” she indicated.

Lordina described herself as a very private person who had always opposed the political life of her husband.

“I felt that he had better prospects of career advancement at Plan International where he worked before going to Parliament. Since then, I have given him every support he has needed and I feel happy when I see him happy.

“I had looked forward to his leaving politics after three terms in Parliament and building our lives out of the public glare but I guess God and destiny are moving him in another direction and I am determined to support and stand by him,” she disclosed.

Mrs. Lordina Mahama grew up in Tamale in the Northern region where she was born to Madam Abena Gyan and Mr. Kwabena Effah, both deceased.

Her father hailed from Nkoranza Bodom while her mother comes from Jema-Ampoma, both in the Brong Ahafo region.

After an early primary education in Tamale, Lordina was admitted to the Bolga Girls Secondary School but after the second year, moved to the Ghana Secondary School where she wrote her General Certificate Examination (GCE).

During her secondary school days she took a keen interest in Home Science and that led her to continue her training at Flair Catering Training Centre in Accra.

On what she does for a living, Lordina says she has some investments in the transport industry and also runs a well-known shop along the Nima Highway in Accra where she deals in food products.

They have seven children who are still in school.