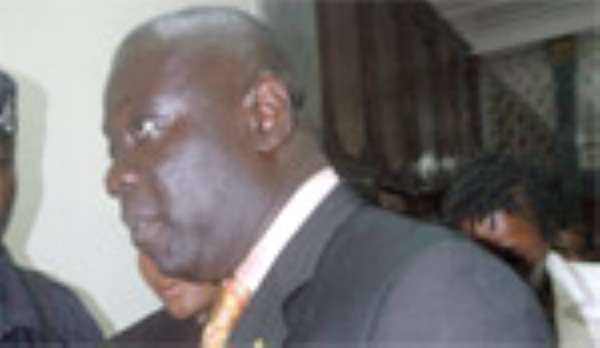 The Minister of Trade, Industry, Private Sector Development and PSI, Joe Baidoe-Ansah yesterday took a swipe at the Ghana Cement Company (GHACEM) over the rampant increases in cement prices in the country.

Speaking at the company's SGS certification ceremony in Tema, the Minister indicated government's displeasure over the galloping prices of the company's products.

According to him, government, through its policies and programmes over the years, had kept faith with the private sector and had indeed supported Ghacem in particular to grow.

In order for Ghacem to reciprocate the gesture of government, Baidoe-Ansah charged the company to reduce the prices of its products so the ordinary Ghanaian could afford.

Later in an interview, the Minister told DAILY GUIDE that if Ghacem continued to increase its cement prices, government would advise itself.

He however declined to disclose measures government was preparing to take against the cement company.

On Ghacem achieving certification from the International Standards Organization (ISO 14001), the Minister noted that there were other ISO certificates that could be won including ISO 9000, ISO 22000 and ISO 14000, all being management standards related to the environment.

He disclosed that his outfit had a programme that sought to introduce ISO 9000 to ensure total quality management systems in the manufacturing and service sector.

According to Baidoe-Ansah, necessary preparations had been made to that effect and very soon the ministry would launch the system, which would be followed by series of workshops to create awareness on the issue.

The Minister said the purpose of the project was to encourage firms to appreciate quality services, noting that it was also to encourage them to install safety measures at their work places.

He noted that Ghacem's receipt of the ISO 14001 certification was not by accident, adding that the company had advanced from the ISO 9000, which over 2 million organizations and companies over the world already have.

In Ghana, it was reported that three other companies had been certified by the environmental system.

The Managing Director of Ghacem, Mr. Morten Gade indicated that Ghacem's environmental management system had been assessed and certified as compliant with the requirement of the ISO 14001, 2004 standard.
According to him, Ghacem was currently the largest
cement producing company in the Heildelberg Cement Group in Africa, saying it was the first within the group to be awarded with ISO 14001
compliance certification.

He explained that Ghacem began the ISO project in September 2006 with the launch of its environmental health and safety policy at its two plants in Takoradi and Tema.

Mr. Gade commended the staff of Ghacem, particularly the team charged to deliver the project, for the good work done.

ISO 14001 is an international standard which specifies requirements for environmental management systems.

These include an environmental policy, determining environment aspects and impacts of products, activities and services.

The Ghacem MD observed that the ISO 14001 certification was rapidly becoming a necessary qualification to remain competitive on the global market.