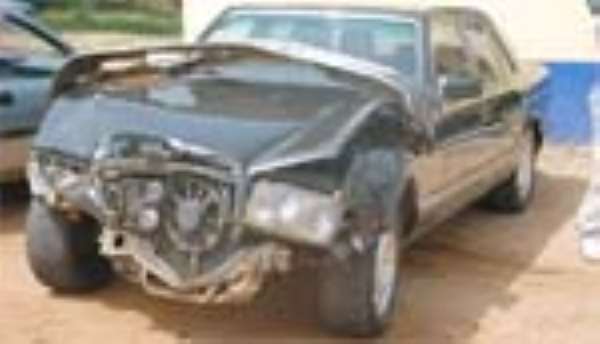 IT HAS been established that Thomas Osei is not the real name of the businessman who allegedly crashed into the Presidential convoy in November last year.

A police investigator, who investigated the background and personality of the accused, told an Accra Fast Track Court yesterday that the real name of Osei was Kamel Din Mohammed.

The witness, ASP Maxwell Adjei Agyemang, who was tasked together with a certain Richard Nyametse by his superiors to undertake the exercise, stated that although the accused gave his full name as Thomas Osei passports which he used to travel proved otherwise.

He indicated that in the course of investigations they retrieved three passports, two bearing the name Thomas Osei and the other Johnny Kwame Doe.

Upon enquiry from the accused why he uses Thomas Osei instead of his real name, witness said the accused allegedly told him that he traveled to Japan for political asylum with a Liberian passport bearing the name John Doe and that while there, he met the original Thomas Osei, a Ghanaian resident, who sold his passport to him.

The accused thereafter made an announcement and reported to the police that he had lost his passport bearing the name Thomas Osei, for which reason a new one was arranged for him with the said name.

The passports, including a service passport he had been using to travel with government officials, were tendered in evidence.

Mr. Kwame Akuffo had raised an objection to the testimony of the witness on grounds that the accused had not been charged with false identity so his evidence was irrelevant to the trial, but the judge overruled that.

ASP Agyemang said the accused disclosed that he had a pump action gun which was later brought to the police by one William Boahen.

According to the witness, during a search in the accused person's house he realized Osei was sweating and restless and when the team enquired from him why that demeanour, he confessed that he had bought GH¢20 worth of cocaine a day before the accident and that he used the cocaine as a painkiller and an aphrodisiac.

At the laboratory where a urine test was conducted on Osei, the witness said the seal of the kit was broken in the presence of the accused and after a test for several abusive substances it proved positive for coke.

Under cross examination the witness agreed that the doctor requested for a second urine sample after realizing that the first sample did not hit the targeted level.

However, counsel challenged him that although the doctor requested for more sample, his client did not urinate into the kit for the second time as was alleged by the doctor in his evidence.

The witness, however, could not tell whether the kit was sealed before the urine was taken.

Counsel had asked the witness, “did you search the doctor to know if he brought more than one kit with him before taking the sample”, and witness answered that they did not do that because the doctor was an officer of BNI and they trusted him.

Counsel, after receiving an answer that the sample was with Mr. Brako when the team left for Osei's office, again asked the witness; “do you think it is wise to put the urine sample of a high criminal case like this in a private car in the care of the doctor, instead of a police car?” and he replied in the affirmative.

Counsel after asking the accused several questions regarding where he (accused) got his cocaine from, pointed out to the witness that he was in court to support the false statements of Dr. Brako and DSP Cosmos Allan Anyan, a Crime Scene Officer already in evidence.