Save The US Dollar — Kufuor Tells World Leaders 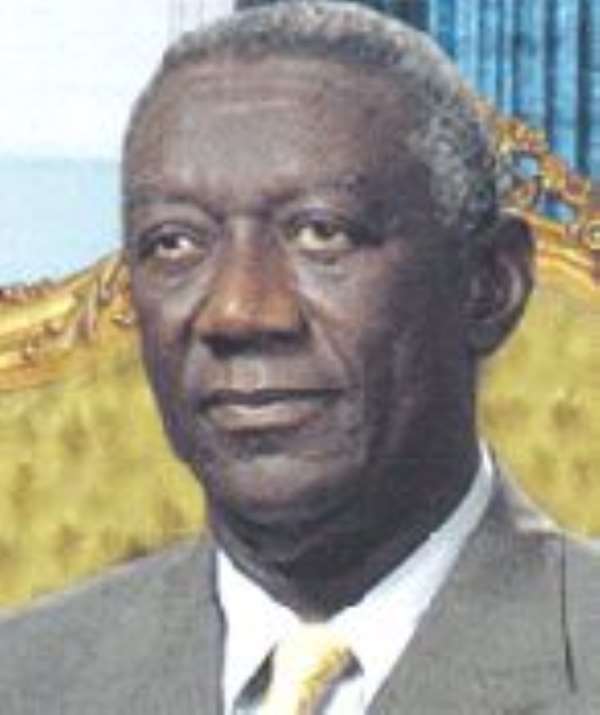 President J.A. Kufuor has called for a global effort to salvage the US dollar from its present crisis because the crisis has dire consequences for the economies of developing countries like Ghana.

Addressing a summit of world leaders in the United Kingdom at the weekend, President Kufuor said if the US dollar was not saved, the modest gains achieved by developing countries such as Ghana whose economies are tied to the dollar would soon be eroded.


“Ghana, for example, trades with the dollar, which is undergoing difficulties on the financial market, so no matter how hard the government of Ghana tries to keep things on an even keel, it is inhibited by forces of uncertain sources,” President Kufuor said at the two-day event dubbed the Progressive Governance Summit.


The summit was held to find solutions to global challenges such as climate change, security threats, global poverty and economic globalisation and it was attended by international experts and leaders, including the Italian Prime Minister, Romano Prodi; the Prime Minister of Australia, Mr Kevin Rudd, and the South African President, Mr Thabo Mbeki.


The rest were the former President of the United States of America, Bill Clinton, and representatives of the United Nations, the International Monetary Fund (IMF), the World Bank, the European Union and the African Development Bank.


The participants were united by a commitment to achieve more inclusive globalisation and work together to meet the challenges of the 21st century.

Their discussions were based on four papers drafted by experts from outside government covering globalisation, climate change, development and international institutional reform.


The idea of Progressive Governance was initiated by former President Clinton on April 25, 1999 when he hosted and led a roundtable discussion in Washington, with the participation of the then British Prime Minister, Mr Tony Blair, the German Chancellor, Gerhard Schröder, the Dutch Prime Minister, Wim Kok, and the Italian Prime Minister, Massimo D'Alema.


The initial goal of the Progressive Governance movement was to enhance co-operation and links between key progressive policy makers and academics, as well as provide a meeting place for exchanging concrete policies and practices.

Progressive leaders wanted to show that progressive politics had been liberated from outdated attitudes and practices.


President Kufuor said the idea of Progressive Governance should assume that it was governance across the board within the globe and must encompass all the known blocs like India, China, the Middle East and Western countries which generally controlled so much financial power.


He said the global village was a reality and was already impacting all nations, adding that such a phenomenon demanded that all subscribed to the same values and standards.


“Progressive alliance or governance should aim at bringing on board the forces that control the clout to make things move smoothly,” he said.


“When you talk about progressiveness, it must look at the constituents that will make for a more human global village and the time is now,” he added.


Welcoming participants to the summit, the British Prime Minister, Mr Gordon Brown, said the it was a unique opportunity for a number of global leaders to discuss some of the biggest issues such as climate change, threats to security and the economic challenges of globalisation confronting the world today.


He said the summit was held at a time when people around the world were concerned about global economic uncertainty and when there was growing recognition that solutions to international problems required a new co-operation between nations.


Addressing the opening session of the conference in London on Friday ahead of the summit, the British Premier said the world was facing the first truly global financial crisis.

It is absolutely clear that the national supervision that we have is inadequate and we need a global agreement," he stated.


Institutions such as the World Bank and the United Nations needed reform to tackle the double threat of economic turmoil and climate change, he said.


"We now have to reshape our global rules and global institutions for this new era,” he added.


The British Prime Minister called for a complete restructuring of international institutions such as the IMF so that they could act as an "early warning system" for the international economy.