Don’t Focus Too Much On Politics — Otumfuo 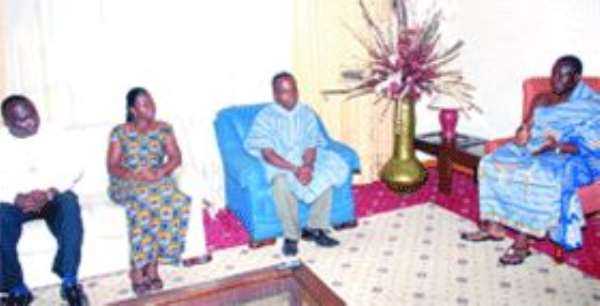 The Asantehene, Otumfuo Osei Tutu II, has stated that even though the nation is in an election year, Ghanaians deserve something better from the media than the present over-concentration on party politics.

“Ghana is not all about politics,” the Asantehene said, and pointed out that there were a lot of pressing issues that the media had a duty to focus attention on to help make life a bit comfortable for the people.


Receiving a delegation from the Graphic Communications Group Limited (GCGL) at the Manhyia Palace last Friday, the Asantehene mentioned issues such as employment, health care, water, electricity and education as some of the national concerns that needed media attention, as against the over-concentration on party politics.


“I am challenging you, the media, to try to strike a perfect balance between party politics and crucial national issues that have the tendency to derail national development,” the Asantehene told the GCGL delegation, which was led by the General Manager in charge of Newspapers, Mr Yaw Boadu-Ayeboafoh.


Other members of the delegation were Mr Kwasi Owusu Asare, the General Manager in charge of Marketing and Public Affairs; Mrs Cecilia Davis, Solicitor Secretary; Mr Albert Sam, the Public Affairs Manager; Alhaji Hashim Amissah, the Zonal Manager for Ashanti and Brong Ahafo, and Nii Adokwei Moffat, the Editor of the Graphic Nsempa.


The delegation was at Manhyia to inform the Asantehene about the upcoming first year anniversary of the Graphic Nsempa, the first regional newspaper of the GCGL with a focus on the Ashanti and Brong Ahafo regions. The anniversary is scheduled for May this year.


Emphasising the importance of the media in national development, the Asantehene expressed strong sentiments about the fact that the media was giving too much attention to politics to the neglect of other important national issues.


Ghanaians, he said, were crying for better health care, reduction in unemployment, improvement in water and electricity supply, for instance, but unfortunately the media was not paying much attention to these crucial national issues.


The Asantehene also spoke about the numerous research reports that continued to remain on the shelves without appropriate action by the authorities and asked whether the media could not put pressure on the authorities to act.


Even Parliament and the judiciary faced one problem or another other that must be brought to light, he said, and challenged the media to place some emphasis on such issues.


He commended the paper for persistently advocating peace in the land, which is what all media institutions have to follow.


He further stated that even though GCGL was state-owned, it had ensured fairness and balance in their reportage, which is a plus to the company.


“You may have faltered once or twice but that is normal with any human institution,” he said,

He recalled the visit by the Managing Director of the Company, Mr Ibrahim Awal, to Manhyia last year to inform him about the birth of Graphic Nsempa and commended him and the company for always keeping him informed about such developments.


“I have since been reading the Graphic Nsempa and I think it is a very good newspaper, which will facilitate the development of the two regions,” the Asantehene said.


Earlier, Mr Boadu-Ayeboafoh said Otumfuo's pieces of advice given during the MD's visit at Manhyia last year had contributed immensely to moving the company forward.


He recalled the compliments Otumfuo gave to Graphic Nsempa last year, which had gone a long way to build on the image of the paper resulting in improved sales.


Mr Boadu- Ayeboafoh said the company's line of newspapers were ready to correct their mistakes if any was brought to their attention.


On behalf of the company, he presented GH¢ 5,000 to the Otumfuo Education Fund, while drinks, and some products of the company were also given to Otumfuo.


The Akyempimhene, Oheneba Adusei Poku, received the donation on behalf of Otumfuo.