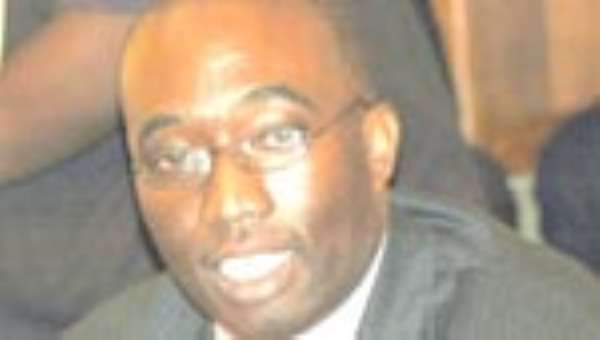 A SUPREME Court Judge, Mr. Justice S. K. Date-Bah, has accepted a challenge from the Attorney-General (AG) and Minister of Justice, Joe Ghartey, to chair a five-member committee charged to review the country's outmoded business laws.

“It is the responsibility of government to provide and maintain the legal framework needed by private enterprises to make their decisions on the investments and other economic matters, which are critical to our economic growth and development.

“It is right therefore for government to monitor and assess the adequacy of the legal system's performance as it relates to business activities,” he added.

The Judge said this at the inauguration of the Business Law Reform Commission in Accra on Thursday. The Commission, which was inaugurated by Mr. Ghartey, is his brainchild to effect some changes in the country's business laws before leaving office.

Mr. Date-Bah was happy the Commission had been formed because “the legal infrastructure for the private sector is performing below par” and so “it is again the responsibility of government to intervene to get the framework right”.

According to him, the priority of the Commission would be to assess, consolidate and complete the work already started on the Companies Bill. “We trust that our new companies' legislation, when eventually enacted, will be a worthy successor to our existing Companies Code, which was acclaimed as one of the most far-reaching and forward-looking companies legislation of its time, in the Commonwealth.”

He assured the AG and the entire nation that the Commission would do its best “to justify our selection as the team that is to advise government on repairing particular aspects of the legal infrastructure affecting business.”

He thanked the AG for giving him and his colleagues an opportunity “to serve our nation and to make an input in the reform process that should contribute to our country's economic development,” and promised that “we expect to put in your hands a product of our deliberations which is of high quality and hopefully, meets your expectations.

“We will endeavour to bring to bear an independent, but business-friendly mind on the matters referred to us.”

The team would, among other things, deliberate on measures to combat corruption in the private sector in Ghana and make recommendations, after consultations with stakeholders, for appropriate legislation on the matter.

Mr. Ghartey said even though they had a four-month mandate staring from April 1, 2008, they should not sacrifice quality on the altar of time expediency, saying they could proceed if they realized the duration was too short.

The Commission would consider suggestions and proposals for law reform from the business and legal communities and determine what areas of business law required reforms, and propose to the AG an action plan in relation to those areas.

In addition, the legal experts would consider the Companies Bill prepared by the Attorney-General's Office and solicit views on it from the business community, the legal community and interested people as well as reputable company law experts.

“You are also to compare the provisions of the Companies Bill with those of countries such as New Zealand, which meet best practice standards in the Commonwealth. Review bankruptcy or insolvency law reform in Ghana and consider the draft legislation currently under preparation for the AG.

“Consider and make recommendations on what related legislation needs to be enacted in the light of the reform proposed in the final draft Companies Bill,” he said.

The other members of the Committee, apart from the chairman, are Tony Oteng-Gyasi, a lawyer and President of the Association of Ghana Industries; Felix Addo of PriceWaterHouse Coopers; Philip Bondzie, a lawyer; and Sal Amegami, Chief Executive Officer of the Ghana National Chamber of Commerce and Industry.