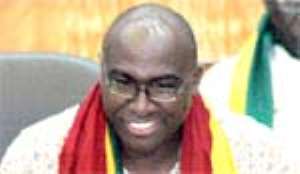 Nominations for prospective candidates vying for the Sekondi Constituency parliamentary seat ended last Monday with three people yet to be vetted on the ticket of the New Patriotic Party (NPP).

The three are Gad Aaron Cobbinah, Papa Owusu-Ankomah and Kwaku Sam-Amoah, all legal practitioners in the Sekondi-Takoradi Metropolis.

Mr. Matthew Ernest Buah, Chairman of the Sekondi Constituency office of the NPP made this known in an interview with DAILY GUIDE in Sekondi on Monday.

He urged the aspirants to conduct a clean campaign devoid of acrimony and also refrain from utterances that could put the party's name in disrepute.

Submitting his nomination form to the Constituency Chairman and other executives at the party's office in Sekondi, Lawyer Kwaku Sam-Amoah reiterated that job creation was his main concern for the people in the constituency.

He said if the youth secured permanent jobs, it will affect their standard of living which will consequently enhance development in the area.

As to his chances of winning the parliamentary primary, the aspirant said he was confident of sailing through, taking cognizance of his experience, service to the party and skills.