Parties Agree On Rules For 2008 Campaign 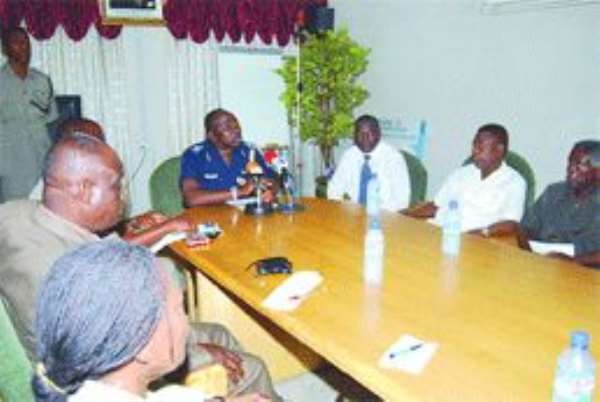 In connection with the December 7 polls, police chiefs and representatives of some of the political parties held a crucial meeting in Accra yesterday, during which the ground rules for the critical phase of the electioneering were agreed upon.

The meeting was held against the background of the volatile atmosphere which characterised last week's visit by the flag bearers of the New Patriotic Party (NPP) and the National Democratic Congress (NDC), Nana Addo Dankwa Akufo-Addo and Prof. Atta Mills, respectively, to the residence of the National Chief Imam, Sheikh Usman Nuhu Sharubutu.


The presidential candidates had gone to the National Chief Imam mainly to fraternise with him and the Muslim community on the occasion of the celebration of the birthday of Prophet Muhammed, but their supporters clashed as both visits took place almost simultaneously.


It was in an attempt to forestall such an occurrence that the Greater Accra Regional Police Commander, DCOP Kweku Ayesu Opare-Addo, convened the meeting with representatives of political parties and agreed on some ground rules for party gatherings.

The NPP and the Democratic Freedom Party (DFP) were not represented at the meeting.


One of the significant resolutions was that political parties would abide by the Public Order Act by informing the police before they organised any rallies and that the police would provide at least five officers to ensure the security of members of the party organising the rally.


The police chiefs said they would not go strictly according to the dictates of the Public Order Act which required five days' notice in order not to overburden the political parties.


They resolved that in the event of two political parties visiting one particular area on the same day, the police would give permission to the party that informed them first in writing.


The police chiefs indicated that they reserved the right to reschedule political activities if they suspected that they might have any security implications.

On the issue of the police providing escorts for presidential aspirants, DCOP Opare-Addo said that was not within his domain but stressed that the police did not discriminate in that regard.


He said any presidential aspirant could apply for police escort whenever he was travelling or needed security and indicated the readiness of the Police Service to help in that regard.


Mr Lartey said the GCPP was committed to peace and that he would abide by the Public Order Act to ensure that the prevailing peace was not disturbed during the electioneering.


He commended the police for their commitment to provide security for political parties, saying that “if this is the new attitude of the police, then it is a good one”.


Mr Lartey, however, asked the police to abide by their word and remain “neutral, fair and firm” in dealing with all political parties, no matter their size.


Mr Asiedu-Nketiah said “the NDC does not have any problems with the Public Order Act, provided it is applied in the best interest of all political parties”.


He, however, appealed to the police not to allow any activity under the guise of a presidential or ministerial function to “gate crash” the activities of other political parties.


Mr Asiedu-Nketiah expressed the hope that the commitment of the police to be fair in dealing with all political parties, regarding the Public Order Act “will not be a window dressing” but would be observed fairly.


“I am pleading that if we (the political parties and the police) believe in what we say, let us stick to it,” he stressed.


Mr Attoh asked the Ghana Police Service to re-orientate the Riot Police Unit to protect the lives of citizens and avoid brutalising them at rallies.


He stressed the need for party functionaries to be civil and avoid confrontation with the police.

DCOP Opare-Addo gave the assurance that the police would be neutral in its dealings with any political party, since the police was apolitical.


He asked political parties to educate their members on the need to be civil and avoid confrontation with members of opposing parties or the police.


DCOP Opare-Addo said the police had orientated their officers to protect lives and not to brutalise citizens.


However, he said, the police might use minimum force to restore peace in serious security situations.