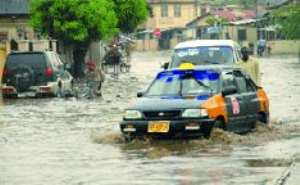 Severe floods will hit parts of Accra between now and August as a result of unusually heavy rains expected in the southern parts of the country this year.

The numerous choked up drains, the poor lay out and the putting up of structures on water courses in the national capital are likely to make the situation worse, Mr Amos Narh, a senior meteorologist of the Ghana Meteorological Agency (GMA), said, adding, “We just have to prepare for the worst.”


Mr Narh, who spoke to the Daily Graphic on Tuesday, said the rains would be accompanied by strong winds, thunder and lightning.


He explained that the expected rains would cause severe flooding, not only because of the continuous downpour but also because the rain water would have no way out of the city as a result of the poor lay out and choked drains.


He mentioned Avenor, Alajo, Sowutuom, Oblogo, Anyah, Santa Maria, Mandela and Weija as some of the areas that were likely to be hit by the floods.


Mr Narh cautioned against movement around electric cables and poles during rainstorms, pointing out that because of the expected strong winds, such electrical facilities could break down, while the roofs of buildings could be ripped off.


Describing last Monday's rain in some parts of the country as only a 10th of the category of heavy rains expected, Mr Narh noted that it was scary to think that it was enough to cause so much flooding and destruction in parts of Accra.


One person was electrocuted at Osu in Monday's floods, which Mr Narh said marked the beginning of the rainy season and indicated that the rains were experienced throughout the country.


He said other areas experienced rains heavier than Accra but did not experience any floods.


Mr Narh expressed worry that people still built on water courses and low-lying areas, despite the inherent danger of their buildings getting flooded in the event of heavy rains.


“We are the causes of floods in Accra. It is our own doing,” he stressed. The rains would peak in June and temporary break at the end of August, he said.


Mr Narh appealed to the media to help in educating the public on the need to desilt choked drains, abstain from dumping refuse into them and building on water courses.


It would be recalled that in June last year five people lost their lives in floods that hit parts of Accra. The casualties were recorded at Kwashibu, near Sowutuom, and Mallam.